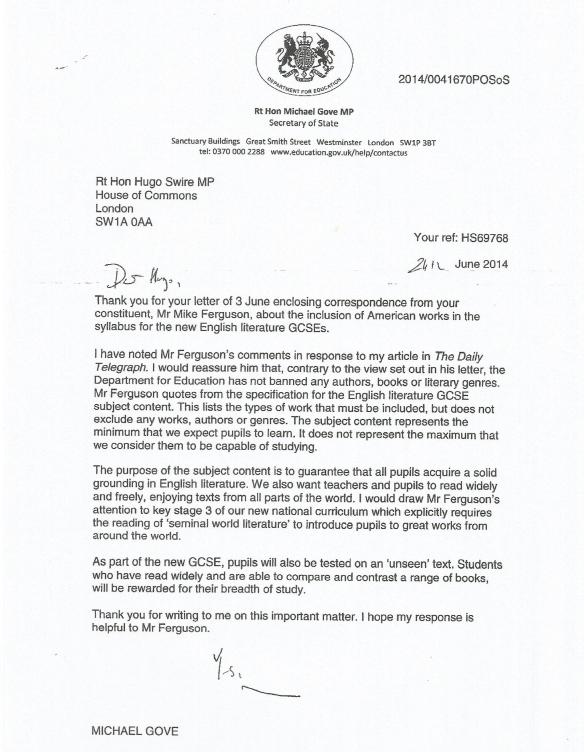 This is the neighing from the horse’s mouth. My local MP had represented my ‘banning American authors query’ in the first instance – thus this response from Gove to him – but I should point out that when I naturally challenged such explanations from this letter again through my MP, he personally responded with more of the above to state he wouldn’t further my questioning because he agreed with Gove, but did so by simply, and blatantly, cut-and-pasting from the DfE/Gove’s justifications – so I stopped that route, and then Gove was gone.

I have made the point about this deceit well enough I think in previous postings, but I thought it useful, for those still interested, to read this if you haven’t already challenged and received similar in the past.

I’ve considered this a ‘clever’ response and argument, and in the negative use of this word I think it is apt enough. There is much that obfuscates in this letter by suggesting there is a grand design across Key Stages 3 and 4 to instill a ‘solid grounding in English Literature’ and for pupils to read ‘widely and freely’. This is completely undermined by his risible notion of the GCSE Orders representing a ‘minimum’ requirement, and not the ‘maximum that we consider them [students] to be capable of studying’. This is so utterly naive [being generous] and deceitful [being candid] in suggesting (a) exam boards/awarding bodies could countenance setting other texts to that minimum, with all the implications for mark schemes and actual awarding grades to accommodate a potentially infinite move beyond that core, and (b) perhaps the most depressingly pragmatic obstacle that there just wouldn’t be time in a full whole-school curriculum for anyone to pack in yet more.

But of course, English students will instead be absorbing a ‘seminal world literature’, and thus those effectively banned American authors within this mix, in their Key Stage 3 curriculum where there would be loads of time for such.

The Crucible as a year 7 starter text perhaps: exploring lust, sin and death as metaphors for the abuse of political power?

2 thoughts on “Gove and ‘The Crucible’”