This is a poem for and of our time – this Covid-19 Time – and though it wasn’t written directly for now, we can extrapolate, as I did on reading it yesterday when receiving, and again this morning.

It is an epic poem for our time though not an Epic Poem in the strict ‘epos’ sense of referencing, as with The Divine Comedy, for example, though there is plenty of humour as well as vision of the nowlife, but a modern epic poem that is reflecting and reassessing and, as the title tells us, reviewing on both a personal and broader basis.

In the self-reviewing there is much honest assessment and self-reflection. Knowing Stannard to be an often astringent reviewer of others’ poetry, and certainly always direct and honest, there is a knowing acceptance but also defiant reassertion of this in the poem’s opening three lines,

Moving past this abrupt introduction, the extrapolation of the poem’s immediate relevance for today can be taken from another early line,

‘Today I can see the dark side of the world’

and the narrative that continues form this, as it will throughout, engages in the muddling and satirising of homilies and parable-esque meanings/lessness of our lives – rooting us in the everyday and mundane and banal: those things embraced increasingly by our world leaders.

An early scare in reading is an apparent revelation that Stannard, in reassessing himself, is signalling a change in behaviour and attitude,

‘…My frame of referencing is adjusting
a tad. No longer sarcastic, cynical, curmudgeonly
or adrift I am a patchwork of charm and delight
and delight and charm’

At this point we are left hanging on the apocalypse, but shortly after a rhetorical question gives us hope that Stannard’s wit will prevail,

‘…But it’s worth listening to
all the little sentimental remarks, tender ballads,
and every time you hear a pleasantry you feel
better for it. Or don’t you?’

We also quickly move on to the central acceptance/revelation of the poem in stating how Stannard – and we – encounter and cope with the world today,

‘…Of course
my frame of reference, the paradox, lurks
in the corner of the room, not even pretending
to bother to try and hide itself’

As we are narrated through an existence increasingly driven by humanity’s immersion in the modern wonders of ‘social media to adult underwear’, Stannard assesses the new realisation for survival which is,

‘Superficiality is no vice (I think that’s how
it goes) and this is no time to mess about in
the misty regions of symbolism, where matter
is not perceived as strange enough’

In a passage that resonates for me, Stannard exposes the easy acquisition these days of Knowledge over experiences, understanding and empathy – not quite the banalities of our hoard of having, but the real fake news of its ‘meaningful’ possession and dissemination,

‘A bird was singing in an elm tree; at least,
it was definitely some kind of tree but I’m
not good at trees. It may have been a yew
or an alder, or a poplar or a birch, or
an ash or a beech, which is a list of trees
and does not include those less often named
in lists of trees such as dogwood, the
hornbeam and the rowan. I can identify
a garden, its lawn, the patio and barbecue and
the servants, but I’m always vague when it comes
to trees. We ask around as to what things are
and everyone, with all their education, seems
able to crap on like so much wind’

Later in the narrative Stannard pins the satirical review more firmly to the sticking-place of the paradox of living he referenced earlier,

‘You know, in the
medieval world people were astonished
by a literal Christ living in a literal heart,
the physical and metaphysical worlds
in the body, an endless source of flowering
ideas. What, you may ask, is there to astonish
us? We can be deeply intelligent and remarkably
dumb, but here are glowing internal suns,
an endless supply of ideas, and no more misery’

This continues in a mix of lyrical and literal reflecting that questions our acceptance of comfort and reassurance,

‘Oh, to be treated
phenomenally, to be a radio back before
radio had been invented, to be a form
of wave, to be an unread book on the shelf
waiting for a reader to amble along. We arrive
at precisely the person we had hoped for
in a kebab queue, on a cross-country
walk, scratching a face to get to the real
self beneath the surface, swimming in
but what the hell, you only drown once. I have
disappeared so many times, on so many sides
of the world, and my absence only provoked
another appearance, always to madcap
applause. I have never been so happy:
thumping statements of enthusiasm,
a youthful surge, flashes of the surreal and
the thrilling’

And that lyricism becomes quite haunting in its dangle between despair and hope,

‘We’ve never seen the like before: between
past and future, between buy, spend, save,
keep, mark for disposal, waste: hovering
between quaking ground, the quivering
towers, and clouds of possibilities, seas of
pearl, sailing with windy sails unfurled’

And as if Stannard is compelled to remove himself from this kind of poetic reverie, he dips back into the catalogue of whimsy which becomes a survival mechanism from thinking too deeply,

‘Okay. Okay. Put me through the mincer
and fry me with some onions. You can’t
expect romantic lyric beauty all of the day’

So is he hanging us out to dry? No, because we are dropped back into the reality of shallowness and deception / lies and subterfuge which we are increasingly employed to assuage and groom for our contentment,

‘…The Devil
swings by in a fevered swoon, crowds flock
to gawp, days disappear into the middle
distance and bounce back bouncing with
renewed vigour, and our handiwork has
made it into the Hall of Happy Fame as if it
actually exists. It was the bone structure
that was so attractive, not the actual content’

Appearance, like knowledge, replaces what we experience and feel for ourselves.

Near the end, Stannard exhorts us as readers to self-reflect and admit to who and what we are,

‘Hand up all those here who consider
themselves down-to-earth, funny, searingly
topical, intimate and global in outlook at
the same time, as well as devastatingly
tragic. OK. If that’s how you see yourselves
get out of the room now’

We are all a willing part of the illusion.

That said, Stannard is not so cynical to never offer us hope, and suggests,

‘…A PhD in Poetry Writing
beckons or, if that doesn’t work out,
a job in a garden centre’

I know the garden centres are all closed at the moment. But we are extrapolating.

I’ve quoted quite a bit but there is a need to make sense of reviewing and characterising the wonderful journey of this modern epic narrative. There is so much more that I haven’t referenced so your own discovery is going to be plentiful. As a final note, there is an appendix of sorts at the end which details cleverly all of those ‘issues’ that haven’t been covered in the narrative. They have, of course, thoroughly, between the lines, and in our extrapolating.

This important narrative poem for our times is only £8 and you can get it here.

I was sheltered (in the phrase of the country, lownded) in a sort of natural porch on the summit of Sca Fell, the central mountain of our Giants, said to be higher than Skiddaw or Helvellyn, and in chasm, naked crag, bursting springs, and waterfall the most interesting, without a rival. When the cloud passed away, to my right and left, and behind me, stood a great national convention of mountains which our ancestors most descriptively called Copland, that is, the Land of Heads. Before me the mountains died away down to the sea in eleven parallel ridges; close under my feet, as it were, were three vales: Wastdale, with its lake; Miterdale and Eskdale, with the rivers Irt, Mite, and Esk seen from their very fountains to their fall into the sea at Ravenglass Bay, which, with these rivers, form to the eye a perfect trident.

Turning round, I looked through Borrowdale out upon the Derwentwater and the Vale of Keswick, even to my own house, where my own children were. Indeed, I had altogether a most interesting walk through Newlands to Buttermere, over the fells to Ennerdale, to St. Bees; up Wastdale to Sca Fell, down Eskdale to Devock Lake, Ulpha Kirk, Broughton Mills, Tarver, Coniston, Windermere, Grasmere, Keswick.

As a teenager returned on my own from the States to England to continue studying for A Levels [and get away from redneck America], I lived with a family whose parents had a beautiful home at the foot of Crag Fell in the Lake District. I was lucky enough to have a few Christmases there as well as other visits, and was taken for walks up many of the fells in the area, including the Ennerdale Horseshoe, though not all at once – such a beautiful lake and surrounds – as well as making solo walks out the back door of the house and up Crag Fell, perhaps also along Grike and Red Gill either way once at the top.

I still have occasional dreams where I am isolated in a huge mountainous area [it must be linked to this experience] and I have to get back/out of where I am and trek solo across that landscape to safety, whatever that is. It is always daunting but I seem to make it, knowing where it is I have to get to.

At the time I was studying Wordsworth and Coleridge at Ipswich Civic College, not in great depth, and as a young aspiring poet I had affinities with their love of nature and the pantheism of Coleridge in particular – hippie affinities, I guess, in one strong sense too. I remember writing descriptions of Ennerdale and climbing the fells and my teenager communing with the natural world around me. Very much earnest emulation, and I have no idea where these journals are, and that’s probably a good thing. 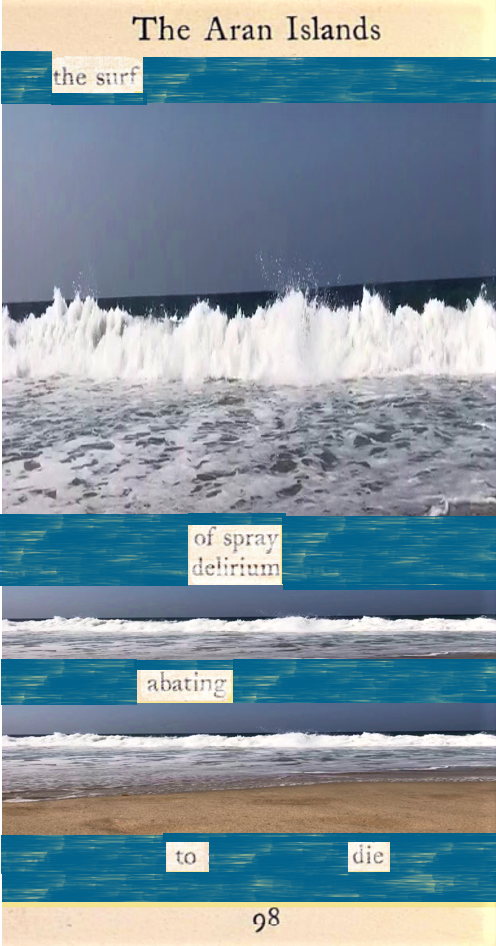 Read/download all of Part I here:

Part I doesn’t have a particular narrative and only the occasional thread: there is a Michael who isn’t me but is because that is my name who appears here and there, and another American who definitely isn’t me and should be obvious. Otherwise, as with found poetry, the ‘content’ emerges in its moment. With no travel embargo on the imagination, I have returned to The Aran Islands, Part II. This is my first outing in this area.

[from a sequence I am currently writing, © MF]