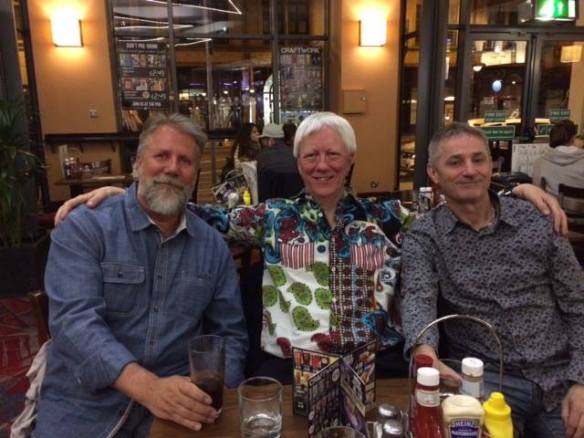 What do you mean the fucking shirts?

Don’t be so fucking pedantic.

That would explain the shirts.

Where does he get them, by the way?

What? From Burt Reynolds?

But he sure wears them.

Only in ‘Boogie Nights’.

Did he wear 60s shirts in that?

So, that doesn’t mean that’s what he wears in real life.

But that doesn’t mean he gets them from Burt Reynolds.

Kev and I pause from our usual to and fro and reflect on where we have arrived. It would appear to be at some coalescence of agreement on the fact Big Al is 60 years old and wears 60s shirts. Whether those shirts come directly from Burt Reynolds would appear to be a fanciful idea, but you never know – Big Al has some esoteric suppliers for his shirts.

Do you think they’re 50s shirts?

Don’t think there was that much colour in those days.

What the fuck do you mean not that much colour? Colour is colour. It isn’t defined by a period in time.

I know colour is colour. What I mean is that much colour wasn’t fashionable in those times.

Have you ever seen 50s pop art?

What do you mean have I ever seen 50s pop art?

Forget it. I think you’re right that it wasn’t fashionable. Are we talking hippy colour?

You think Big Al is a hippy?

That’s not what I’m saying.

So what do you mean by hippy colour?

Hippies were in the 70s.

Do you think you have to take drugs to wear shirts like Big Al?

Kev and I pause again, this time somewhat overwhelmed by the sustained agreement that has interfered with our routine. I decide to pick up my opening thread, just to see where it unravels.

As I said. Big Al is 60. That means he remembers a better Rangers.

Why the fuck Texas?

What has that got to do with Big Al?

Isn’t he from Texas?

Ah, I thought he had an accent.

But he lives in Wales.

Is it a Welsh accent?

No, but it isn’t Texan either.

That’s not Steinbeck you numbnut.

Yes it is. Lennie says it.

No he fucking doesn’t.

It’s from a Robert Burns’ poem.

Oh yeah. I’ll give you that. What did you mean by a better Rangers?

Rangers FC. Big Al will have known of their football in better days back in the 60s.The days of three willies.

We pause again. Kev downs a Stella and I down a Jack. All this skirmishing over Big Al is thirsty work. We normally get pasted just so we can tolerate the shirts, but tonight’s cycle of conflict and resolution demands another kind of wasted indifference. But I try to salvage one last piece of coherent observation and repeat,

So it’s his birthday?

Am I missing something?

It’s hard to imagine, considering their colour, but yes you are.

What the fuck do you mean?

What about his shirts?