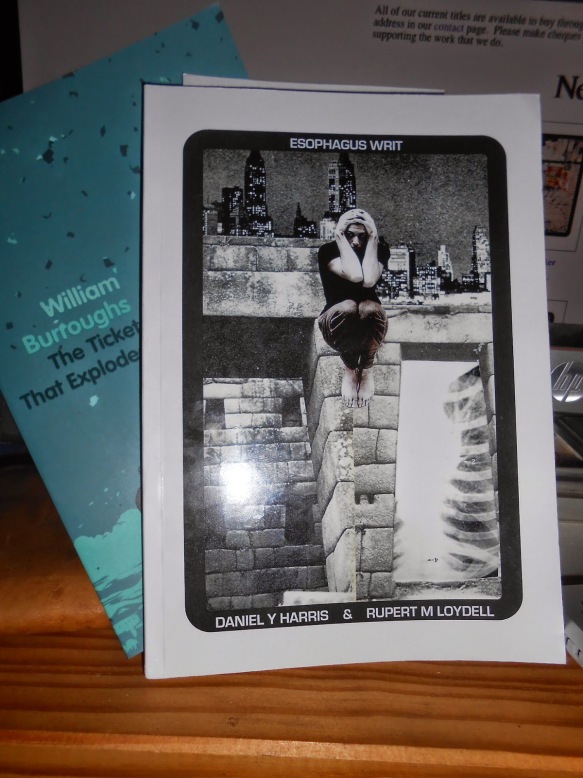 I didn’t see it cited in the notes from the Introduction by the little-known but clearly scholarly Dr Theodolite Cardew, but I am sure that the anthropoetjests Messrs Harris and Loydell will have referenced directly or indirectly the influential works of Fartov and Belcher in their own scholarly ruminations on the meanings of in their new poetry collection Esophagus Writ.

In the way cosmic coincidence will commune with those of us who listen, it was uncanny that I am currently reading Burroughs’ The Ticket That Exploded because this work is cited in the notes of that Introduction – the quote ‘the word is now a virus’ – and to expand on this reference, our dynamic duo explore the ‘other half’ which includes the meanings of, and do so with the compelling organism of their refracting poetic words.

I say ‘refracting’ because the poems in this anthology are placed side by side: one on the left [generally tempting with an organic accessibility] and then the one on the immediate right a bifurcated refraction of its leftie [generally teasing with an organic complexity] – never a copy or mirror re-working. Thus the organism of these shared words and ideas becomes a mutual virus that infects both and then spreads across the whole as a parasitic creator of new meaning.

The dichotomy of these refracted new meanings can be exemplified in titles like The Museum of Oblivion/The Museum of Oblation; The Ghost of an Impoverished Past/The Gimp of a Tumescent Now; Enter Babe Rainbow/Enter Billy-Bob Bovary, the latter in which ‘I suddenly felt much better’ and ‘I felt better in my thong’ wrestle with the plurality implicit in the meanings of.

A closer analysis of any more of these refractions – an inspection surprisingly missing from the otherwise erudite and learned exploration of Dr Cardew – reveals how the prism of this poetic intercourse shifts and splits meanings of two startling [and intentional] obfuscations. From the domesticity of

‘My beautiful time bomb,
will you dance before we explode?
How is the weather inside today?’

[The Mystery of the Mind]

to the psychoanalysis of

‘Hell is glial. Heaven, a dendrite. Between
podes, the myelin of a normative stint
in living with charm and poised saunter.’

[The Mystery of the Brain]

where the damaged layers of both our expression and understanding are wrapped up in each focus, one on love and one on over-analysis so that neither explains though one may seem more palpable.

I won’t comment further on the poems for these are for the reader to mainline and in doing so find their veins of personal meanings because ‘Everything should become clear to the most idiotic among us’ [Advice to the Reader]. I have just injected a tiny droplet of the virus.

I will nearly close on an admittedly pedantic point: I take issue with the esteemed Dr Cardew’s citing of the Blinky Snoodle work ‘Stupid Groups of Animals’ in The Journal of Behavioural Science vol. 12, #2, 1993 as a paper in any way informing the theoretical basis of these poets’ work as this fraudulent fancy was roundly discredited in the subsequent volume of that venerated journal by the renown American anthropology expert Wyde I Ceen.

I will, however, fully conclude by stating that this work is above and beyond any academic reference points a demonstrative hoot. If the virus is Poetry, the vaccine is reading the meanings of this challenging quality.