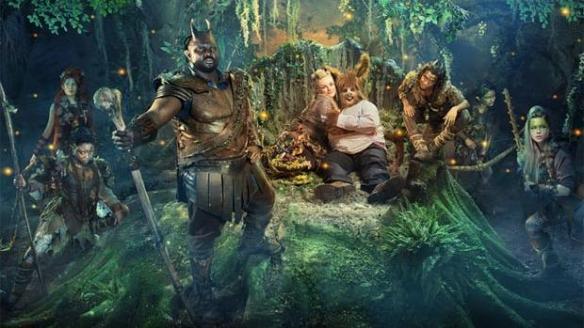 Shown last night, I thought this was a spirited modern production retaining the spirit of the original in its fun and fantasy as well as explorations on the meaning of love, this latter deserving its contemporary extensions.

It was definitely a little bit of Dr Who and a little bit of Baz Luhrmann’s R&J, with an obvious pinch of Hannibal. I liked the iPad clones and other modern technology inserts, as well as the in-jokes that went with this: the TV programme A Comedy of Errors. What a hoot to be in the know; however, this wasn’t the more complex to know.

The more complex, though no doubt many will see it as having been puerile, where the innuendos highlighted by emphasis and/or editing in the text [or even inserted – I don’t know it that well] which I thought were playful and witty.

I am not always a fan of Matt Lucas but his Bottom was wonderfully varied; Nonso Anozie was powerfully apt as Oberon, and Maxine Peake was perfect as Titania. Harry Potter as Lysander was quite amusing.

I also simply thought it was refreshing to see a prime time Bank Holiday Monday television spot going to Shakespeare rather than any of the more expected popular crap options that are out there, though I will be hoping that the wonderful watchers on Goggle Box – which isn’t crap – who quite like much of that other actual crap will nonetheless share my enthusiasm for this Bard’s BBC outing.