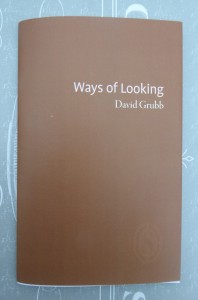 I have been reading and enjoying very much David Grubb’s recent poetry, posted mainly on Stride here and at International Times. They are as poems both lyrical and oblique, beautiful flows and cadences of language with sudden shifts in direction and narrative lines/focus.

In searching for information about Grubb as poet and his work, I read about this smith/doorstop collection and 2012/2013 winner in the Poetry Business Competition. I ordered immediately and it has arrived today. The chapbook is based in poetic approach on Wallace Stephen’s poem Thirteen Ways of Looking at a Blackbird, and the six poems, each with their thirteen phases, further represent what seems to be a signature feature of Grubb’s work that I have seen so far – the lyricism of tone and flow with the suddenness of move in emphasis.

The narrative surprises are a delight to be handheld into, and I do think every thirteen part poem has a narrative line, as disrupted as it might be. And it is the gentleness of the surprise that warms each reading – these are not shocks and/or moments of apocalypse. They are shifts in glimpse, their extra surprise in the cleverness of idea/description. These being ‘surprises’ it is problematic for reviewing, as mentioning diminishes their essence. As compromise, I do want to illustrate but I will only do so for the first poem Ways of Looking at a Lost Farm.

Rather than plot the actual lead into the shifts [as I’ll continue to call them] I will simply quote the lines which even out of context reveal the core of their appeal and interest. From 1.

mother coughing in her grave again

…The estate agent knows
the price of an acre of autumn

hugging side by side, as if we owned the snow and wind,
as though the radio was a friend

That will do, and all of this is from an increasingly moving account of a family forced from their farm to take up residence on an estate, and it is a poem of change and regret and external intrusion/interest and ultimately misconceptions of what was special about their life.

In Ways of Looking at Blessings, the narrative start seems more conventional – more linear and connected – but then the poetic beatitudes take on more distinct aphoristic gestures, and this becomes very much the feature in the next poem Ways of Looking at a Very Old Lady where the succession of aphorisms take on comic/ironic tones, that is until the suddenness of a plaintive stanza catches us out in our smiling

7.
The man who comes to stroke my hand says
he’s my grandson and that he remembers
closing all the shutters at night and that every
room had its own way of forgetting things.

The final poem is Ways of Looking at a Poet. Again, I won’t spoil by over-quoting, and I certainly won’t quote the wonderful stanzas 12. and 13., their two encapsulations of respectively ‘each poem’ and ‘each poet’ hauntingly [I think that is the right word] insightful, but I will close by referring to the humour of stanza 6.

It is easier to deal with
people from Porlock; it is
often like mending a chair
that you are sitting on.

1 thought on “‘Ways of Looking’ by David Grubb – smith/doorstop”