Having to move a bookcase and its contents is a good way to encourage a pause and then a browse of some of those long unread books you’ve taken off the shelves for the shift. I had a quick scan of a 1997 Ambit and then this first of two P.E.N. Anthologies, the other from 1975.

I thought it would be interesting to remind myself [it could well be the 40+ years since I really looked] and write about what was ‘new’ in 1973, hoping to find some as then undiscovered and now celebrated poet. I lose track of how old – excusing the obvious opposite – established, currently famous poets are, but a quick check on the names collected revealed these were already well-established writers, and the work selected was therefore ‘new’ to that year and, apparently, unpublished. These luminaries will give an indication of that revelation: Fleur Adcock, W.H. Auden, Charles Causley, Douglas Dunn, D J Enright, Gavin Ewart, Thom Gunn, Seamus Heaney, Ted Hughes – and stopping that early in the alphabet suggests what will follow in more ways than the surname order.

All good poems, by the way, but I needed another angle on what I might write, and it came timely in Stewart Conn’s Introduction and in this opening line to the intro proper,

‘A marked polarisation is evident in English poetry, and the public’s response to it, today’

and I will pick out this other line from a little later,

‘The trend is healthy so long as it is for the right reasons, and provided the poetry’s real strength underlies local colour’

It should be obvious from these two extracts where this is going: I am of course referring to the very recent Rebecca Watts PN Review article ‘The Cult of the Noble Amateur’ and the subsequent furore this has generated, obviously the forensic blog response from Hollie McNish and the debate’s reporting in, for example, The Guardian, including the Dan Paterson response, as well as attendant social media commentary, and, among many others I have read, the Soraya Roberts The Baffler article ‘No Filter’ which you can read here [and I link because this might not be as obvious as the others – apologies if I am wrong].

No, I am not entering the debate and not endorsing any views referenced here. Chicken? Probably. But I was fascinated to see the parallels – no more than this – in Conn’s Introduction which I will post in full for you to read if you will, as well as his further observations on how poetry/writing engages with its ‘new’ world of 1973, the parallels with today quite captivating as well,

I want to select one poem as illustration from the whole, and this has proved difficult, most being today quite well known. In the end I went for the following from Edwin Morgan, a favourite writer of mine, one of four poems from a sequence called School’s Out. In the first, Morgan uses Plato as his main reference point; in the second it is Milton; in the third – and I really enjoyed this – it is Summerhill’s A.S. Neil, and in my chosen fourth it is Ivan Illich, but more important [and in an echo of Conn’s introductory comments on the impact of the then modernity] how in education, like poetry, we embrace as subject matter and indeed means of production the new technologies and/or similar,

‘We know how Armstrong landed, bleeps call us
in our breast-pockets everywhere we go,
we’ve got cassettes….’

and whilst these references, and those you will read next in the full poem, seem and are dated, it is what they represent and mean that still reverberates, though I particularly like Morgan’s humorous final take on this, 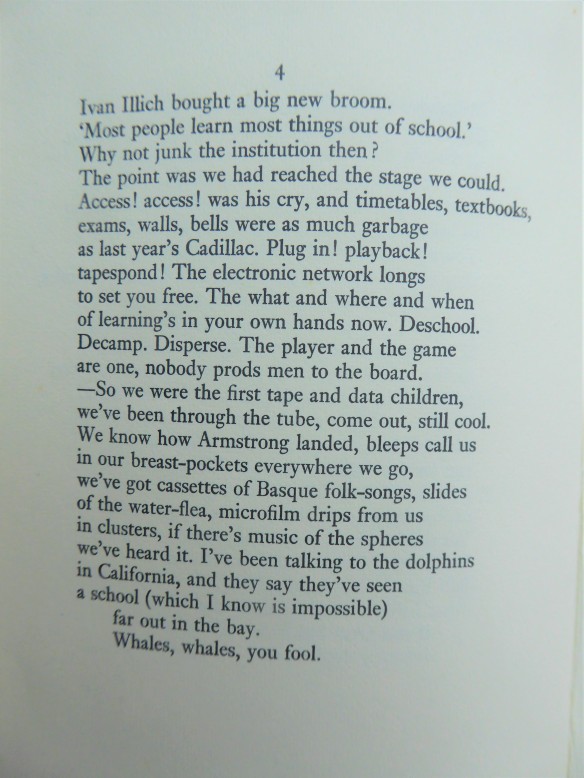