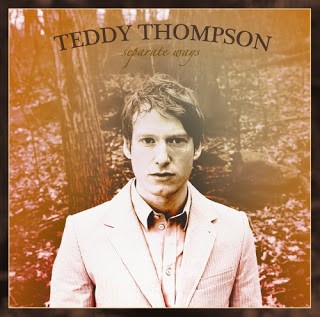 Teddy Thompson is my favourite contemporary solo singer songwriter, and that pits him against other greats, for example Ryan Adams who is significantly more famous on a global scale, and a significantly different artist. Teddy Thompson is quintessentially English: self-effacing, utterly ironic, lyrics lacerated by sardonic wit, and possessing the most exquisite voice. He could perhaps be seen in the Ray Davis songwriter lineage in terms of his lyrical humour, though it is more introspective than being interpretive of an English way of life.

Teddy Thompson is and isn’t a star. He is critically acclaimed and has a stalwart fan base. He is popular in the States, but again on the critical rather than stadium circuit – not that singer/songwriters commonly attain the latter, but it’s an illustrative pole. His latest album Bella was clearly targeted at widening that audience with its lush production values, but whilst it garnered a broad focus on release, I don’t think it achieved its purpose. It is an album I like though it doesn’t for me compete with my chosen one here Separate Ways, or A Piece Of What You Need. Indeed, its production detracted from the essence of his craft, though album songs played live and acoustic burst through with their innate and core excellence. It was, by the way, a little difficult to choose my ‘top fifty’ between these last two mentioned albums, his second and third releases, as both are excellent. Separate Ways gets the nod for reasons to follow, and it is his breakthrough collection, released in 2005.

Separate Ways contains in its title track my favourite single song of his. It is a stereotypically gentle and calm number, the tensions that create drama placed in the lyrics. Musically, it is simply but cleverly layered – the whole song, with a single strummed guitar and mirroring brushed snare at its centre [and shimmering, uncertain strings], rises throughout to its ironic chorus And I don’t care about you/If you don’t care about me/We can go our separate ways/If you want to, and it is that fourth line that bristles in its honest shifting of the blame, reinforced later by the pathetic repeat of his vulnerability The ties of love are strong/But they can be undone/And we’ll go our separate ways/If you want to. And it is this vulnerability that also rests at the candid core of much of Thompson’s sarcastic self-effacement which seems to me to be wholly English. This sentiment is reinforced in the next song on the album Sorry To See Me Go where the litotes of its narrative reveals his true feelings I might be leaving soon/Away with the new moon/Just wanted to let you know/In case you might be sorry to see me to go. The classic Thompson caveat is in the In case – he so often yearns for someone else to retrieve him from his woes. The honest confessional of the whole album gets perhaps its most directly honest comment in Think Again where the presumably real break-up of its storytelling is laid bare in Walking away I feel ashamed/Thinking on what I’ve done/She was naïve and I was a sleaze/Some things can’t be undone.

Musically this album shines bright throughout and did ironically bring Thompson some of the attention he so caustically ridicules about stardom in opener Shine So Bright with the lines I wanna shine so bright it hurts/I wanna be death bed thin/Never realise the state I’m in/Walk with my head in the clouds/And be followed around by crowds. Second track I Should Get Up provides the first of two rock numbers within the otherwise balladic whole, and Thompson’s guitar playing is accompanied by famous father Richard. Teddy is a fine player himself, and this is witnessed when he plays live – his acoustic touch being superb. Everybody Move It sees Thompson at his most simply humorous, poking fun at party dancing. The call to boogie begins with the opening comic if ungrammatical line Sat in the corner you could pass for dead and continues with Bump and grind, have a good time/Free yourself and lose your mind/Now the party’s pumpin’ and the groove is on/Grab the nearest body and move along. Hard to imagine Teddy letting his hair down like this without being terribly self-conscious. The comic sentiment is picked up a little more aggressively in the other rocker That’s Enough Out Of You with the line Being happy is easy if you’re dumb. This is a telling quip for someone who does seem to suffer his fair share of maudlin and mellow thoughts.

The closer Frontlines provides examples of Teddy’s beautiful vocal, occasionally moving into his perfect but never overdone falsetto. This song too rises slowly, letting the voice take the fullness of its charm to superior heights. Hidden track, The Everly Brothers’ Take A Message To Mary, is sung prettily by Teddy and mother Linda, this straightforward duet providing yet another uncluttered platform for Teddy Thompson’s vocal to reign. I have read reviews where his voice is rated yet not necessarily praised, but a sublime example of its prowess and emotive clarity is in his duet with dad on the latter’s song Persuasion. Not on this album, but worth having to cherish.