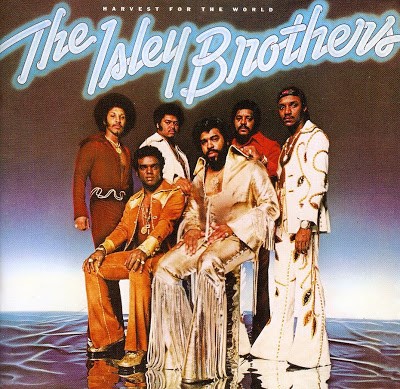 The Isley Brothers sing on this album the sweetest of sweet soul music, Ronald Isley’s falsetto at the heart of all vocals, solo and in harmony. The title song is as beautiful as any beautiful soul sound can be, here at the smooth and soft prettiness point of that pretty spectrum – handclaps providing what funk there is, especially as it rises within the closing chorus that repeats the title. This of course has been set up by the gorgeous Prelude that begins the album, the melodrama of piano strains and crashing symbols beneath the thumping drums with Ronald’s plaintive plea for a harvest for the world, a harvest for the people, gather all together, a harvest for the children.

But if you want some funk, you’ve got it with third People of Today, oh yeah yeah. And then fourth Who Loves You Better is psychedelicised into the mix with Ernie Isley’s signature guitar sound, wah-wahing in that beautiful tone he makes his own. Suitably funked, we are returned to the loved-up caress of fifth At Your Best [You Are Love] where Ronald’s vocal and Ernie’s guitar coalesce in the height of their honeyed sensuousness. This is as perfect as such soulful sonorousness can be, before next Let Me Down Easy usurps with its deeper groove of soft resonance as Ronald sings with a melancholy that soothes in its despair, but only in the loving paradox and mantra of anticipation, if ever you were to leave me.