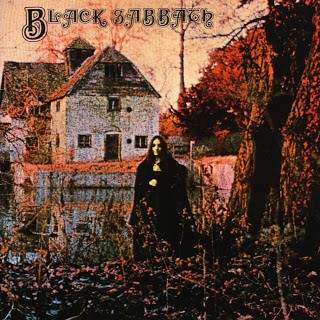 Rain, tolling bell, thunder, drawl of a heavy riff, and slow bleak questions before the apocalypse strikes its shocked response Oh No,  Black Sabbath announces Black Sabbath, and the demons, wizards and devils therein are dark procreative forces announcing a new genre through this Satanic birthyell, or the vivaparous voice that is Heavy Metal God Ozzie Osbourne.

Raw as a pig’s hide kicked by a mad farmer’s boot in the wild black of night, the relentless ramrod riffs and largely monosyllabic lyrics pound out again and again the most sublime new testament of Rock. By the time we get to N.I.B. – 40 seconds in to be precise –

the most memorably malevolent iambic pentameter in Rock is fully realised: OH YEAH!

Diablo Tony Iommi lays down his own straightforward but powerful incantations in dark worship at the altar of Blue Cheer, and Fiend Geezer Butler provides roars from other visiting daemons carried on the rumbling rolls of Beast Bill Ward.

I bought this album not really knowing who or what it was – but drawn by the cover – somewhere on a market stall in London. I played it for the first time, as memory serves, at the house of a female student friend and other likeminded 5th year musical vampires where we sucked its fresh blood with relish. I do believe there was a collective and spontaneous headbang, but reality and myth merge after all these years.

I do know that its dark drones merged with simple melodic lines still thrills today. I might be wrong, but it seems to me that Paranoid has more acclaim, and War Pigs is the common choice for a fans’ anthem, but this debut raw assault on the senses has left its permanent mark on my musical hide and long listening ride.