As with my Chris Smither selection, I had a dilemma in which album to choose for Tilston – either his debut An Acoustic Confusion [1971] or the one I have obviously selected, his third from 1977. There was no two-fer to get me out of another jam, and I didn’t think that cheating two days in a row was on anyway. Save it for another time.

Tilston is yet again an artist I have only discovered in recent years, maybe in the last 5-7 – I can’t remember. And on the one hand I would love to have grown up with his folk excellence which I’d have played constantly in the early 70s, but on the other, there is the phenomenal surprise about music that it can be discovered many years after its initial production and have its amazing impact and influence at that time too.

Making a comparison with John Martyn, as with Smither, might seem to detract from Tilston’s individuality, but it is meant both as compliment but also to place the music in its time: and Tilston is even more Martynesque. An Acoustic Confusion perhaps the most, but that album  and Songs From A Dress Rehearsal have clear similarities to early Martyn, for example The Tumbler as well as The Road to Ruin and Stormbringer. There is the guitar work where Tilston is brilliant, especially in his finger picking, but there is also occasional slapping that echos Martyn. The songwriting and singing is equally reminiscent: brisk and fresh folk and so English.

Opener Do What You Please [Hey Girl] certainly reflects a maturing of songwriting compared with Tilston’s debut, with more varied and complex structures and patterns, though it is never complicated. The hooks are more evident. Second track Face of a Friend showcases this again and with Tilston’s sweet vocal. Third She’s The Woman foregrounds the vocal even more and there is distinctive strength here. Fourth The Greening Wood is a good example of the Martyn echo: virtuoso guitar, with slapping, and another fine song. Fifth track Impressions is simply beautiful, and as I write I know I cannot do justice to each song with description, certainly not all 17 tracks, so I hope I have conveyed a gist of the outstanding quality and permanence of Steve Tilston’s material. I will mention tenth track Rain All Around that has the guitar and melody of the work both Jansch and Renbourne were producing throughout the 70s, and Tilston played with Renbourne in his band Ship of Fools. 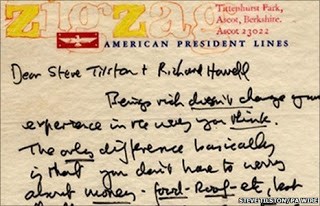 There is a great John Lennon story concerning Tilston. In 1971, as an emerging singer/songwriter, Steve was interviewed and asked to speculate on how any potential fame and fortune would affect his songwriting in the future.  Steve, apparently, replied that it was bound to compromise things. John Lennon, on reading this, wrote to Tilston disagreeing, stating Being rich doesn’t change your experience in the way you think. The only difference, basically, is that you don’t have to worry about money – food, roof etc. But all other experiences – emotions, relationships – are the same as anybody’s. [NB since writing, this is now the basis of the 2015 Al Pacino film Danny Collins].

Honest and amazing advice from someone so famous. The trouble is, Steve Tilston never received the letter – not until 2005, 34 years later, when a collector who had purchased it contacted Tilston to verify its authenticity. He couldn’t from actual experience, but it was proved to be a genuine letter. I think that’s a great story, though sad the letter was never received as intended. It finished with 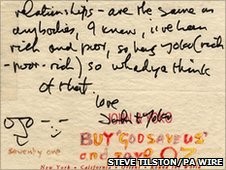