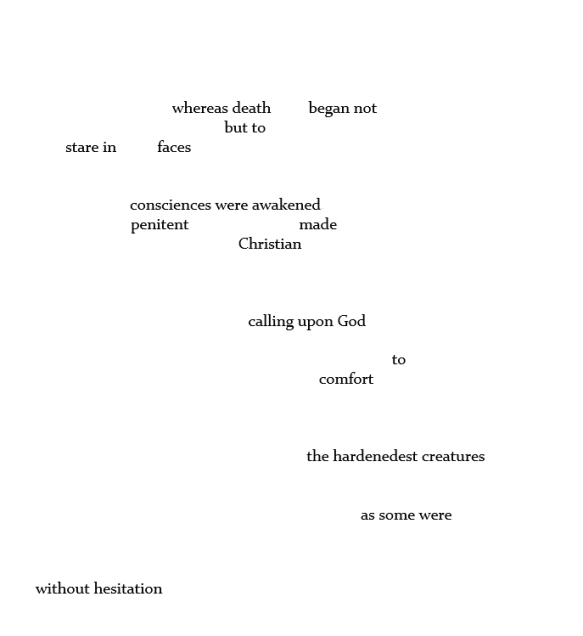 Though this is my last from A Journal of the Plague Year. Quite different to American Cookery – clearly – this text has become too potently painful to look for further transformations. I had hoped to find and re-present examples of treatments, good and bad, of those who suffered, and expressions of humanity and hope and other positive references.

Reading this, one does become deeply impressed with Defoe’s attention to detail and commitment to recording – from memory as a five-year old at the time, but more-so in writing it with the reflection as an adult and research, likely his uncle’s journals of the time [this too, then, a transformation] – yet also his absolute candour and the humanity he presents as felt and also witnessed in others. This speaks for itself and can’t/shouldn’t really be altered, or so it has seemed to me.

As others who read this earlier in our global Covid pandemic have commented, there are many similarities and resonances in Defoe’s account of 1665. In reading, I have been amazed at the planning and organisation and legislation implemented to try and deal with the outbreak: examples of political intervention [local and national] that have sounded both familiar and, perhaps, overlooked in our contemporary dealings. I’d have to be more detailed to fully support, and am not looking to do this here.

There are accounts of care and caring from law-makers – magistrates in many cases – and, of course, the medical profession, though Defoe frames their commitments within the impossibility of the context. As I’ve said, it is his own sense of caring and concern that pervades the created personal narrative.

Reflections on the charlatans and schiesters who sought to exploit and profit revealed the innate evil of this then and now. This is presented in the obvious context of the then total desperation of the people. When I found the word ‘trumpery’ in one paragraph, this was the kind of crossover I thought pertinent if transforming the then to now [Donald’s bleach etc.; I had that day of coming across these references seen a BBC News item on a firm touting vapourizers as preventative equipment for buying].

It was in moving into Defoe’s description of those ‘jobs’ assigned to people to monitor and prevent the spread of the plague that I was compulsively reading and not looking for earsure opportunities, the most moving that of the Watchmen who were allocated to each house where there was a known plague victim, with a morning and then a night shift, and the horror of this task as well as the impossibility of making sure those inside didn’t ‘escape’ their homes.

After this, accounts of mass burials, and the pits dug for these, became even more poignant and unsuitable for altering, for whatever reason/purpose. The details of Defoe’s presentation of personal expressions of loss are overwhelming.

Then there are the kindnesses shown to him as the recorder, but also the vitriol [as a reflective ruse from a narrator actually writing/publishing in 1722]. This is a vivid and timeless journal narrative, emotively apt and illuminating, and I have now stopped seeking to find new meanings from those which really should remain as rooted in their time as still makes them totally relevant now.