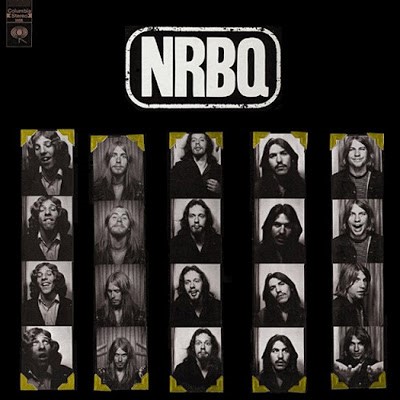 NRBQ – New Rhythm and Blues Quartet – formed in 1967 and brought out this debut eponymous album in 1969 on Columbia Records. It is an infectious, eclectic offering including covers of Eddie Cochran, Sun Ra and Brownie McGee/Sonny Terry.

The album starts with the brisk C’mon Everybody, essentially a straight rock’n’roll cover, but second track, the Sun Ra Rocket Number 9, immediately introduces the lively variation on this album, its jagged jazz rhythms delivered with dominant percussion, monotone vocals and Don Adams on trombone as the song launches into its discordant close. Third track Kentucky Slop Song is a rousing and comic Country pastiche, and this opening trio establishes the delightful diversity that so appealed when I first acquired the album in ’69 not knowing anything at all about the band.

Fourth track Ida, written by band member Terry Adams and jazz composer/pianist Carla Bley, is the first ‘rock’ number in as much as this was the genre I was expecting in looking at the longhair photobooth snapshots on the album cover. The McGee/Terry track C’mon If You’re Comin’ is a wonderful and honest acoustic version, with fine harp playing by Terry Adams. Side one of the album closes on band member Steve Ferguson’s song I Don’t Know Myself, carrying its early Rolling Stones ballad echo with confidence.

Side two of the album begins with another Ferguson number Stomp, which according to the liner notes he introduces when playing for this recording as This is a tune ah wrote, itsa stompin’ song an’ ah hope it makes every one of you wanna do jes’ that, and the phonetic presentation accurately reflects the intonation and inflection of much of the singing, delivered again, for example, in next track Fergie’s Prayer where I can hear that similar modulation in the singing of Kings of Leon today. The album continues with another cover, the Cobb/Channel Hey! Baby, and it is Countrified rock of the best head-bobbing, foot-tapping kind. Side two closes with a Terry Adams’ jazz tune Stay With Me, a neat final stamp of the whole album’s eclecticism, though it must be stressed how simply and unpretentiously that has been represented.

For a band that was never that well known and who certainly didn’t produce ‘hits’, they have a substantial discography and devoted following, and though going not surprisingly through a number of personnel changes, they continue today.