I’ve just come across a posting on Twitter where a teacher revels in [is loving] the ability to intervene in [to live edit] a student’s creative writing – as the student is writing! – using an iPad as a supervisory tool. I’m being polite with the term ‘supervisory’.

I want to say I can’t imagine anything worse for destroying a student’s confidence in and enthusiasm for and desire to continue with a piece of ongoing creative writing if you do this – but I suppose the teacher could walk over and remove the device from the student and throw it on the floor and stamp on the screen and then set the whole thing alight.

How appalling! I have been critical before [accepting this is opinion] of other published/advertised writing advice for students which I have found outrageous or just stupid, but in those cases and now I would not and am not seeking to embarrass the teacher, so I haven’t, for example, replied to the posting on Twitter.

Should I? Well I’m not. But I will comment here. This is the posting, with the student’s name removed [it isn’t removed on the posting!] as well as not referring to the teacher’s name: 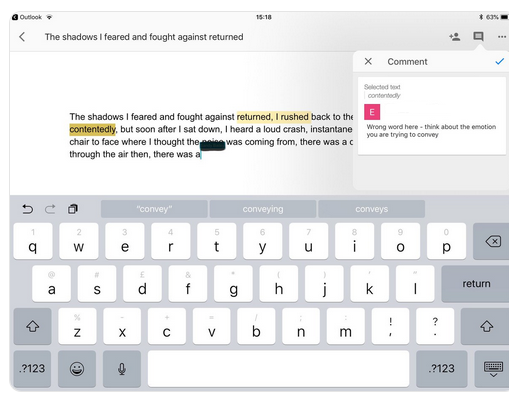 I’m not going to overdo this, but I’ll start with the comment ‘wrong word here’. This is a student in the process of writing so why/how would you contemplate ever interfering at all, let alone making a ‘correction’ at this stage? And who is to say, with writing not completed, that there is/can be a ‘wrong word’?

Perhaps the writer was being ironic… OK, unlikely, but there is a point here. And I shall cut to the chase as I don’t want to wind myself up for a long one: students as writers need the free space and time to write without interruption and to let thoughts and ideas flow as much as this is possible in the already alien environment of a classroom for writing creatively [though this will vary in the continuous and conscious efforts a teacher will make, immediately and over time, to establish some sense of a calm and creative-friendly aura, and so on].

Writing needs to be written first [I think that would get a ‘live correction’ from the Big Onlooker] and then the critical editing comes afterwards, by the student, or, in the varying positive mini-environments one can establish, paired and/or small group readings and suggestions.

Again, I’ll not go down another long road. But my goodness – to actually revel in and promote the instant ‘feedback’ of criticising made possible by ‘technology’ beggars belief.

One final observation: if this was – but I don’t think it is – some kind of exam practice scenario, I would still detest the notion of such an intervention. There is the obvious pragmatic advice about leaving time in an exam to re-read, check and edit. That said, as an examiner I would expect other examiners who read ‘mistakes/mishaps’ to do so as just that and not therefore penalise unnecessarily. But as I say, that is another longer discussion.