I know you supported him for the Tory leadership – that’s no surprise as he was your immediate predecessor/mentor, and better the knife-in-the-back you know at these treacherous times – but now that it has been proved beyond all doubt that Michael Gove is a darkly duplicitous, nasty-minded, selfish, crazy and ironically utterly incompetent Machiavellian megalomaniac, couldn’t you see your way to reversing his decision when Education Secretary to have American authors banned from study for GCSE English Literature, just so, at the very least, you can begin to scrap away some of the tones of shit you allowed him to leave in his wake and on your naïve self?

Yours in a tad of sympathy,

The plum tree is raining again – a light mist falling
from the leaves – so it is difficult to mark these
exam scripts. I have set up and moved to this table
to catch the early evening sun otherwise blocked by
tall conifers when I sit on the usual patio. Aphids
drip too, and there are wet spots where I swipe them
away as well as those finest drops that now mark the
dark wood though not on papers with their answers.
No doubt the writers in their intense over-training
will tell me it is a foreshadowing, a pathetic fallacy
about dampening down or a haze veiling meaning.
This is nonsense, but I can’t explain how it is drizzling
without a cloud in the sky, not like specious coaches
or birds above pissing in laughter at their approaches.

Inspired by the wonderful gift of this wonderful painting, this is my poetic thanks to Mike and Jackie: 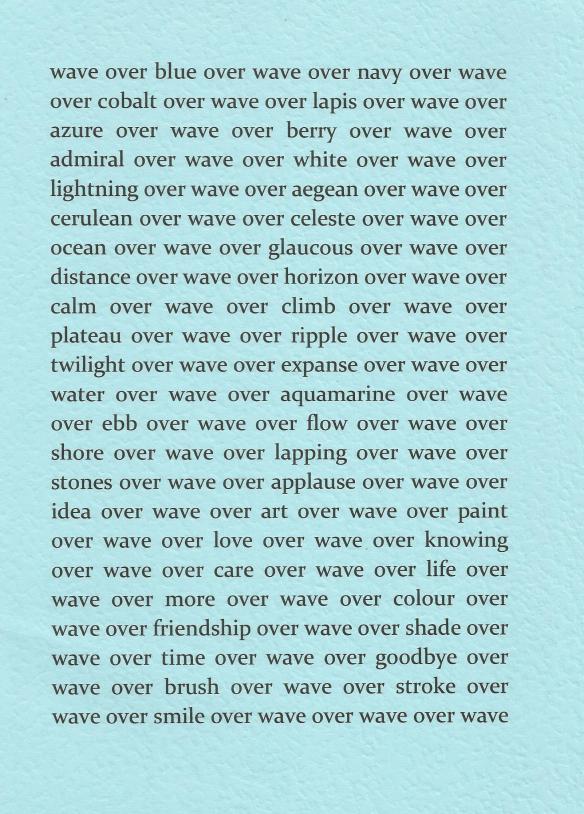 It seems impossible not to get a reflection in the glass, but here is the painting framed, and on its such welcome reception:

I have had my Independence Day lunch – bourbon coated ribs and hash browns and corn on the cob – and tonight I will sustain the culinary focus with a meat a la hot dog/wiener pizza: the lighter layer [excuse health paradox] of celebrating my American roots.

My deeper and more meaningful thoughts as ever on this day are of my family still living in the States. This is my thanks and celebration on this day, an emotional patriotism that has little to do with nationalism and similar.

My postings about my Grandpa Carlson on this blog will have relayed further deeper feelings about my past and growing up in America. Elsewhere I will have reflected on what it means to be an American living in England, not least my most recent poem Immigrant Irony, this latter reflection prompted by the life I have had and continue with in England – Suffolk, Oxford, Devon – over the last 48 years. The political observations regarding the past few days post-referendum further indicate thoughts closer to this home.

I found today – so new to me – and earlier posted on my Facebook page this Walt Whitman quote which seems apt to present again, expressing so beautifully ‘American’ thoughts and feelings with which I and millions of other Americans [who won’t vote for Trump!] can wholeheartedly identify:

This is what you shall do: Love the earth and sun and the animals, despise riches, give alms to every one that asks, stand up for the stupid and crazy, devote your income and labor to others, hate tyrants, argue not concerning God, have patience and indulgence toward the people, take off your hat to nothing known or unknown or to any man or number of men, go freely with powerful uneducated persons and with the young and with the mothers of families, read these leaves in the open air every season of every year of your life, re-examine all you have been told at school or church or in any book, dismiss whatever insults your own soul; and your very flesh shall be a great poem and have the richest fluency not only in its words but in the silent lines of its lips and face and between the lashes of your eyes and in every motion and joint of your body.

Preface to Leaves of Grass

Is this a dagger which I see before me,
The handle toward my hand?

I teach bloody instruction, which, being taught,
Returns to plague this inventor:

The early morning air blew over the City, and buildings were tussled with anticipation but unknowing. And the shouts of change rumbled again, this time much more obvious than before.

Mikey took off his thick rimmed glasses. He said mysteriously, ‘Take off your smile, Boris. The air feels surprising.’

Boris removed his smile. The shadow of what was to come grew greyer, and the morning session neared. On the wind, the sound of crashing came to them. It was the sound of Brexiters falling over themselves in blind departing panic.

Boris said, ‘Tell me how it’s going to be old chap.’

Mikey had been listening to the distant sounds, but didn’t give a monkeys. For a moment he was business-like. Like Brutus, planning. ‘Look across the room, Boris, I can tell you so you can almost see it.’

Boris turned his head and looked across the podium and up the darkening slopes of the moment to come. ‘We’re going to have it all,’ Mikey began. He reached inside his attaché case, and brought out the gun; he snapped off the safety, and the hand and gun lay on the table of papers – the big buffoon’s leadership campaign speech – behind Boris’ back. He looked at the back of Boris’ head, at the place where the ruffled falling leaves of dishevelled hair fell randomly across where the spine and skull were joined. Like they were once. And Mikey thought, at least he has a spine, but then he banished this recognition from his mind in an instant, smiling like a fish with its face to the glass-tank wall.

An anxious journalist called from a different room and another answered.

‘We’ll have real power,’ said Mikey, ‘like we had at Oxford but with so much more ability to ruin infinitely more. And we’ll have…we’ll have…’

‘That was another dream,’ Mikey said.

‘And I get to be Prime Minister,’

‘And you get to be Prime Minister,’ Mikey couldn’t help but smirk.

Boris giggled with happiness, rather than because of his usual buffoonery. ‘And rule the roost.’

‘No, Boris. Look out across the room, like you can almost imagine yourself as Tory Leader.’

Boris obeyed him. Mikey looked down at the gun.

‘You aren’t mad at me, are you Mikey?’ Boris asked.

There were crashing footsteps, this time journalists and Tory sycophants communing and coming.

‘Go on, Mikey. When do I make my announcement?’

‘You….and me actually. Just me really Boris, you old fool. Just me.’

Boris said, ‘I thought you were my friend Mikey?’

‘No,’ said Mikey. ‘No, Boris, I’m not your friend. I’m my friend. This isn’t a jolly foreigner’s moralising narrative about some pair of friends representing the fundamental decency of human partnership and caring. We screwed that with Brexit, you stupid old so and so. I had fairy tales like that banned in a previous megalomaniac life and don’t intend to allow that kind of EU-inspired bodhicitta to be available as propaganda again.’

The voices of expectation came close now. Mikey raised the gun and stopped listening to any others, apart from those of Sarah and Dacre and Murdoch, and all the other dark movers and shakers in the brush of his dangerous head.