‘She isn’t around anymore.’

‘She isn’t around anymore, Mr President.’

‘That’s not what I mean. When you say isn’t around I don’t think I like the sound of that. Or I should say I don’t like you saying that to me.’

‘She is no longer with us, Mr President.’

‘Is that bad? That sounds bad.’

‘Bad, Mr President? Do you mean bad as in not good or as in terrible?’ Spicer rather than the secret service agent asks.

President Trump pouts with pursed lips but the others in the Oval Office are not yet sure if this is just his normal face or one of concern. If Kellyanne was there she would probably let the others know, as she was always in the know about these kinds of things, but she is no longer around anymore.

‘She just isn’t here, Mr President,’ Spicer tells him. ‘No one had her removed, Sir.’

‘I’m sure about this, Mr President, and I don’t think…’

‘….gas,’ the President interrupts. ‘That was bad.’

Spicer looks down at his feet, but at least he is standing on them. Not like Kellyanne who had hers curled up under her ass sitting on the Oval Office chair. That was the beginning. That’s when others – not the President – suggested it was time for her to go, not that they suggested this to the President. He hadn’t noticed. It was like a lot of things the President didn’t notice. Like not noticing if Kellyanne was around anymore.

‘You can sit down Sean,’ the President tells Spicer, pointing to the chair where Kellyanne sat on her feet.

‘I liked having Kellyanne around.’ the President says to anyone listening. ‘She made me feel good.’

President Trump looks at Spicer with an empty stare that Spicer interprets as normal on one of the few occasions when he is right.

‘She is secured,’ the agent who was earlier speaking with the President speaks again.

‘Not here anymore,’ Spicer interjects. ‘At the press briefing today I will be informing everyone that Kellyanne is taking a well-deserved vacation, Mr President.’

‘Is she having a vacation?’ the President asks.

The agent looks at Spicer who looks at his feet – his own feet – and shuffles them a little.

‘It’s the last day of National Poetry Month today, Mr President,’ Spicer continues. ‘I’m going to read the poem Vacation by the former US Poet Laureate Rita Dove, Mr President, and then I’m going to make a seamless reference to the fact Kellyanne has gone on vacation and make it sound relevant and intelligent.’

The President looks at Spicer with an empty stare. So does the agent. So does everyone else in the Oval Office.

‘Today’s my 100th day in office,’ the President says, looking confused and disappointed.

‘That’s why I’m reading a poem, Mr President,’ Spicer tells him. ‘It was Kellyanne’s suggestion, Mr President, one she made 100 days ago. A bit of foresight I think. She had some good ideas, but in the end she had to go, Mr President.’

‘Is Kellyanne not with us anymore?’ the President asks.

Something there is that doesn’t love a wall,
That sends the frozen-ground-swell under it,
And spills the upper boulders in the sun;
And makes gaps even two can pass abreast.
The work of hunters is another thing:
I have come after them and made repair
Where they have left not one stone on a stone,
But they would have the rabbit out of hiding,
To please the yelping dogs. The gaps I mean,
No one has seen them made or heard them made,
But at spring mending-time we find them there.
I let my neighbour know beyond the hill;
And on a day we meet to walk the line
And set the wall between us once again.
We keep the wall between us as we go.
To each the boulders that have fallen to each.
And some are loaves and some so nearly balls
We have to use a spell to make them balance:
“Stay where you are until our backs are turned!”
We wear our fingers rough with handling them.
Oh, just another kind of out-door game,
One on a side. It comes to little more:
There where it is we do not need the wall:
He is all pine and I am apple orchard.
My apple trees will never get across
And eat the cones under his pines, I tell him.
He only says, “Good fences make good neighbours.”
Spring is the mischief in me, and I wonder
If I could put a notion in his head:
“Why do they make good neighbours? Isn’t it
Where there are cows? But here there are no cows.
Before I built a wall I’d ask to know
What I was walling in or walling out,
And to whom I was like to give offence.
Something there is that doesn’t love a wall,
That wants it down.” I could say “Elves” to him,
But it’s not elves exactly, and I’d rather
He said it for himself. I see him there
Bringing a stone grasped firmly by the top
In each hand, like an old-stone savage armed.
He moves in darkness as it seems to me,
Not of woods only and the shade of trees.
He will not go behind his father’s saying,
And he likes having thought of it so well
He says again, “Good fences make good neighbours.” 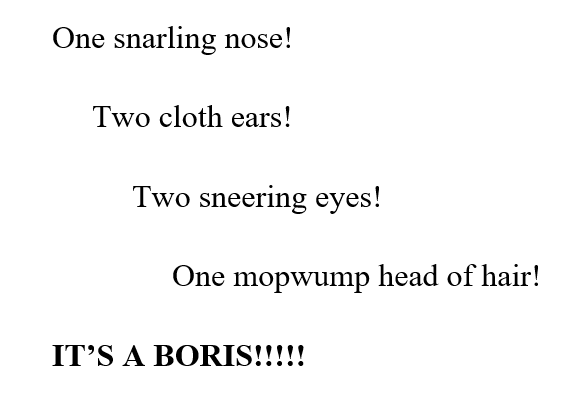 The good news is I was not alone in detesting last night’s HIGNFY; the bad news is how HIGNFY is becoming as pointless and pathetic as the politics/politicians it used to be so much sharper and accurate in exposing.

Twitter postings are rightly voicing and therefore reflecting widespread disdain about this Friday’s episode of Have I Got News for You and the programme’s early attacks on Jeremy Corbyn.

The very first programme of HIGNFY – itself an acronym artefact – was aired in 1990 and it must be the longest surviving comedy panel show and now institutionalised cultural artefact. Over the years it has delighted with incisive satire and straight comedy gags, the team captains of Ian Hislop and Paul Merton sustaining this firstly with host Angus Dayton and subsequently with guest hosts of varying quality and impact [I was, for example, disappointed with the great Patrick Stewart’s chairing last week when he performed like a parody of Brian Blessed, unwittingly yet still sadly doing so].

Obviously over time even the best of such television will get tired on top of making the occasional, or even regular, mistakes. Ian Hislop has always been but is increasingly just smug; Paul Merton’s signature comic incredulous face can only rarely work. To be fair – begrudgingly – it was Merton who did in this Friday’s programme make a critical observation about the singular negative portrayal of Labour as a Party in its sustained attacks on Corbyn.

If this matters at all and you are therefore reading I would suspect you saw the episode, so I won’t outline the three specific moments of ridicule and just piss-taking. The one I found poignantly ironic – and so I definitely do not mean comically so – is the clip of Jeremy facing a small crowd of sign-carrying supporters, and as he is about to address them, an aid rushes into the shot to turn Jeremy around to face the cameras filming this: the ‘classic’ electioneering framing where the candidate is backed by the supporting political people and their signage.

The implication of Corbyn ‘needing’ to be turned is that he is a buffoon, not knowing how to perform. And yet, without question, isn’t it rather the case that Corbyn was instinctively doing what he always does: addressing his audience, no matter how big or small, as people, rather than instinctively as the entirely sham performance set-piece it is for others, especially Theresa May who has recently – apparently – banned workers from attending their own workplace venue for such an orchestrated presentation, or more tellingly when she recently spoke to camera about encouraging people to ‘come to this town’, obviously not knowing where she was, this more arrogant buffoonery? A long question, but rhetorical.

And speaking of buffoons. Whilst the panel did discuss Boris Johnson’s recent mugwump comments about Corbyn, this didn’t, in fact, get the acerbic ridicule it deserved, Hislop and Merton probably the most aware of Boris’ scattergun ineptitude from his historically shambolic hostings of previous editions of HIGNFY.

I have never been an apologist for Corbyn’s problematic leadership of Labour, and projecting of himself as a Leader of the country, often precisely because he does not play the performance game that is probably, even if cynically, an inherent part of being elected by a large body of people these days. However, I have always and will continue to champion his principles and integrity, and the genuine, humane and personable qualities so clearly demonstrated in his sweet and warm and honest turn to that crowd of sign-carrying people – yes, people, not planted human and sign placards, even if in essence this was the understandable ruse of the event. 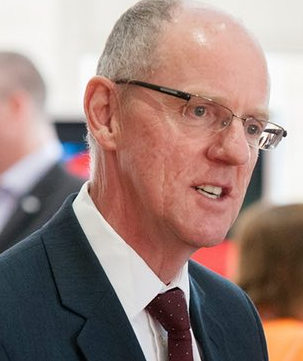 The Glib has intervened in arguments about under-funding of schools in England and offered the following educational advice to the nation.

Reacting to criticism about cuts to school budgets, The Glib is quoted as having written in response to such condemnation with the following suggestion:

“Schools could save, on average, up to 10% by making use of our national energy deal and over 40% by using the national deal for printers and photocopiers.”

With over 8.56 pupils in schools in England [including Independents], The Glib has also suggested schools should outsource all copying needs to their own pupils. By linking this to a national Raising Handwriting Standards campaign, provisionally titled Pupilcopiers, this would, according to the Schools Minister, save “bucketloads of money”.

In contacting the DfE to seek more details on this proposal, a spokesperson stated that the idea was being put on hold until after the general election, adding “whilst not being implemented as government policy in the immediate future, all schools, and especially Academies, have the autonomy to begin trialing of this excellent cost-cutting idea at any time of their choosing.” 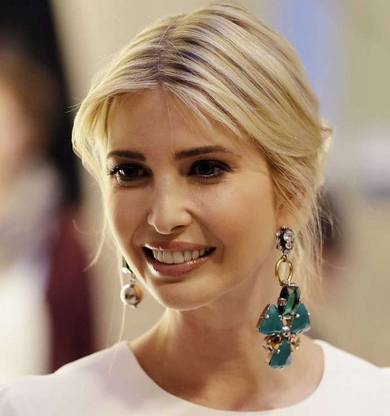 It’s not
black and white
good and bad

the balance in
yin yang’s
happy and sad

Always pleased, and with thanks to IT. Read the poem here: 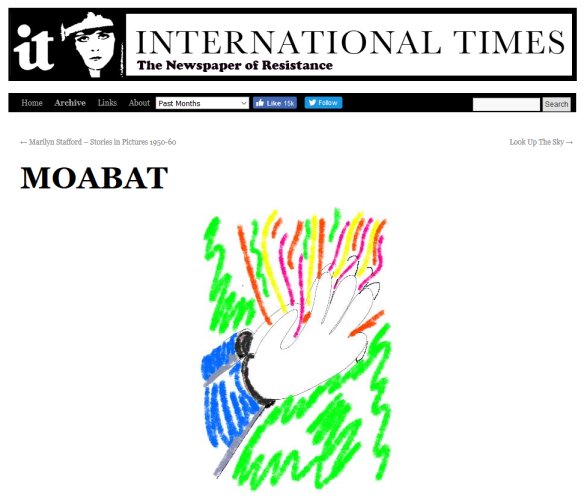