I attended the Uncut Poets with Harry Guest last night at the Phoenix Arts Centre. This was part of the Exeter Poetry Festival and I did particularly want to see Harry read.

My poem that follows seems the most apt way to characterise the evening. I could only stay for the first part, but as Harry read during this, that was perfect. I also enjoyed the other open-mic performers I saw where the eclecticism of such a night is given its free voice.

The poem is as the evening was, with only the very slightest licence. The dancing above was a little annoying, but also hilarious – not the dancing itself, I’m sure, but its second-hand intrusions. 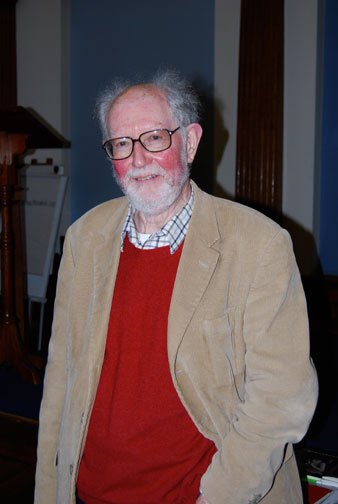 I wrote this one in my head…

At the front, the fold-away table’s legs are
taped together to stop any words from

collapsing and falling to the floor.
A poet sitting next to me – we are all writers,

surely – has friends currently out in Baghari
as I read the text message over her shoulder.

from which she could later recite her slices of life.
The first reader has secreted a series on molluscs

to now un-shell and let crawl around our seats.
Open-mic number two is introduced –

James Taylor! – and a swift correction follows
of his surname, then the cover-up joke on how

he might serenade us with You’ve Got a Friend,
the bum note of irony immediate when

James introduces the first poem titled No 13 from
a sequence about his loneliness and depression.

Harry reads after the fifth, first of the two invited
writers with his surname aptly as one Guest.

His words fill the room with softly spoken
certainties, his own and translations mainly from

when in Vichy prison. Harry’s love of language
also resists the boundaries of what it is that divides,

even tonight where in the performance room above,
busy feet of the Bharatanatyam dancing competes.

I leave at the break, miss the next five and other guest,
but I have a poem to recall at home and transcribe.

One of Harry’s more recent poems The Last Intruder – superb – is posted at the excellent Stride magazine here.

Clearly not reading this blog!

This land is your land, this land is my land
From California to the New York island;
From the red wood forest to the Gulf Stream waters
This land was made for you and me.

As I was walking that ribbon of highway,
I saw above me that endless skyway:
I saw below me that golden valley:
This land was made for you and me.

I’ve roamed and rambled and I followed my footsteps
To the sparkling sands of her diamond deserts;
And all around me a voice was sounding:
This land was made for you and me.

When the sun came shining, and I was strolling,
And the wheat fields waving and the dust clouds rolling,
As the fog was lifting a voice was chanting:
This land was made for you and me.

As I went walking I saw a sign there
And on the sign it said ‘No Trespassing’.
But on the other side it didn’t say nothing,
That side was made for you and me.

In the shadow of the steeple I saw my people,
By the relief office I seen my people;
As they stood there hungry, I stood there asking
Is this land made for you and me?

Words and Music by Woody Guthrie

Like this little collection, big with a collective voice,

and here’s a small elephant voice,

Old pirates, yes, they rob I,
Sold I to the merchant ships,
Minutes after they took I
From the bottomless pit.

But my hand was made strong
By the hand of the Almighty.
We forward in this generation
Triumphantly.

Emancipate yourself from mental slavery,
None but ourselves can free our minds.
Have no fear for atomic energy,
‘Cause none of them can stop the time.
How long shall they kill our prophets,
While we stand aside and look?
Some say it’s just a part of it,
We’ve got to fulfill the book.

Emancipate yourself from mental slavery,
None but ourselves can free our mind.
Have no fear for atomic energy,
‘Cause none of them can stop the time.
How long shall they kill our prophets,
While we stand aside and look?
Some say it’s just a part of it,
We’ve got to fulfill the book.

Pleased as ever to have my poem published today at the fine Stride magazine here.

Are you a consumer
A mere number
On a supermarket line?
Wear a perfect mask
And never show your feelings
Maybe you can make the time
To be a free thinker
You could find your own style
You may feel more alive

Do you ever wonder
Can we save our planet
And where will it go in time?
While hawks destroy
And healers send joy
Back to the starry night line
For a free thinker
With some individuality
You may find you feel more free

I have recently been searching out friends and acquaintances from the past – searching out to either make contact or to see how they are getting on in their lives from what information I can find. Sometimes there has been a closeness that warrants contact; sometimes it is a genuine but distant interest in the pathway of their lives.

The interest is sparked by my own aging and thus nostalgia for years past. At times I have regretted having lost contact. In many cases I have wanted to get in touch and reminisce with those who had made an impact on my life, either by an occasional but memorable engagement or some more indelible meaningfulness.

Over recent years I have tried to find information on Ann Wordsworth who was my English tutor for a year at Oxford. Having been unsuccessful for some time, and perhaps not trying intelligently enough, I did recently and sadly find an obituary about her death in 2013, aged 80. That wasn’t then necessarily a surprise, and I couldn’t be angry with myself for not having succeeded: and perhaps most significantly, I will have been a minute part of Ann’s life and she will have had, I’m sure, the richest of engagements and memories with family and friends.

The obituary here brought back my fond memories, especially of my meetings at her house too where I would read essays aloud, essays so heavily influenced by her teaching, ideas and directions they will have been, at many times, direct and possibly embarrassing mirrors of her influence – though I hope she took pleasure too in that inspiration having taken such a hold.

I was actually studying for a B.Ed. at Westminster College, and having attained this after three years, one of the bonuses of being there was to be tutored by someone from one of the Oxford universities for the English totality of the degree, Ann Wordsworth then teaching at St Hugh’s College.

I was a mature student, having worked before study, and I don’t know if it was because of this or simply common, but we would always drink a glass of wine during our tutoring sessions. She was above all the most stimulating but also demanding teacher – stretching me to places I’m sure I never quite reached, and even to those that I did I cannot now understand their surrounds having lost the relative peak and intensity of the moments – but she was also most attentive to me as a person and the life I was living at the time: married and living and working on a farm for the first two years to pay for my study.

Always then and since a sceptic of the privilege of the Oxford and similar system/situation – the ‘town and gown’ of my actual experience living there for the final two of my four years studying, and, for example, a first teaching practice in an Emergency Priority Area school at Blackbird Leys as well as causal work as an industrial cleaner at the Cowley car plant – I nonetheless revelled in that privilege. The privilege of using the Bodleian Library to research the criticism Ann referenced and recommended; attending Oxford English faculty lectures, ranging from the likes of Stephen Spender to Terry Eagleton, and I would tend to the more radical as Ann herself was a radical thinker and teacher.

In this respect I was so lucky. I am sure many of the tutors there at that time, 1979, would have been far more traditional in their thinking and tutoring. Ann was steeped in Freudian theory and influence, Lacan especially, as well as structuralism and deconstruction, Derrida the critical theorist darling then. I was out of my depth with this, not least when Ann arranged for me to attend a lecture by Derrida where the select audience [I recall Maud Ellman being there] was clearly fully engaged in his talk, delivered entirely in French so that I didn’t understand a single word.

Authors that influenced most from Ann’s recommendations were Harold Bloom and Edward Said, the former an advocate of Ann Wordsworth’s work. I did use and apply much of what Ann had taught me in my early years of teaching, most obviously when my school acquired a sixth form and I thus taught A Level English Literature. I was still so heavily influenced in those early 80s teaching years that I wrote a poem about Derrida and submitted it to the Times Education Supplement. It was politely declined, and I’m not at all surprised, especially when I read now. I did also write to Ann occasionally then, sharing my continued enthusiasms [and that poem] but we eventually lost touch and, as I have been saying, it is in more recent years I tried to find out about her with the possibility of contacting again.

Being too late, I have written this tribute, and thank her all the same for that particularly and intensely challenging but enriching period of intellectual activity. As important was her friendship, that care and attention to me as a person when times were hard in certain respects, and her overall personal warmth when I will have been just one of many awestruck students.

As a member of the Coleridge Memorial Trust I am pleased to announce The Coleridge Weekend Programme on the 20th-22nd October, in Ottery St Mary, England, the home of STC’s birth.

It is CMT’s great hope to have the sculpture memorial in place by the 250th celebration of his birth!

An edited reading of The Rime of the Ancient Mariner by Laurie Palmer in period costume.
Poetry readings by The King’s School students.

Presentation by Oscar Pearson on the Coleridge Memorial Trust’s achievements and aims.

Reading of Kubla Khan and other Coleridge poems.

Samuel Taylor Coleridge’s Birthday Celebration peel of bells by the Bellringers of St Mary’s Church, Ottery, in honour of the town’s most famous son. Sponsored by Otter Vale Probus Club.

Short guided walk [at own risk] and talk – led by Sam Coleridge to Pixies Parlour. Meet on the bridge between the Land of Canaan car park and The Tumbling Weir Hotel on the Mill Stream. £10 contribution per head for fundraising; children under 12 years old free. Dogs welcome if on lead.

Coleridge Link – strenuous 9 mile walk [at own risk] led by Sam Coleridge. Meet on the bridge over the Mill Stream between the Land of Canaan car park and The Tumbling Weir Hotel. £10 contribution per head for fundraising. Dogs welcome if on lead. Bring water, suitable walking shoes and clothes.