Today
the egret is standing in a
flood plain of the Otter’s riverbank
flattened by rushing water from recent
rain, and browned dead by
cold.

Tomorrow
it will be invisible
if it is still and still standing there,
lost in the white of a promised
Siberian Arctic snow,
but we shall see.

White or buff
and at dusk
just as visible.

This egret is over two hundred years old,
the same Coleridge observed as a boy
walking in this town of his birth,
archiving for later,
dreaming already of an albatross
he’ll never actually see.

Recently,
a great white migrated to Somerset, its
belated chase of Samuel to write his
Rime and Kubla there, opium moving
to nether regions,
deep in
fantasy.

Nuptial plumes
breeding demise,
but xeno-cano
will share
their calls,
little snowies of
sound –
those who haven’t survived
two centuries to sing now. 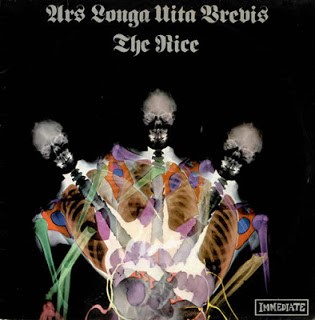 Its psychedelia is a perfect mirror of the genre at this time: there are childlike, playful songs mixed with progressive interpretations of classical music. Indeed, that latter penchant for such acts pilfering from the classical catalogue was the catalyst for me and many others my age to take a serious interest in classical music at a time when we had little reason to do so otherwise, and I certainly had no nurturing from family for this.

A typical playful song is second track Little Arabella with its lounge-organ sound, Beatlesesque horn arrangement, and silly lyrics to a bubbly silly tune. But what wonderful fun. Even opening track Daddy, Where Did I Come From taps into a youthful sense of rebellion [though hardly revolutionary: instead, a conventional birds and bees query] but the question asked is mocked by its melodramatic tone and the naff parental response to which the asker seems to be dying in agonised rejection of that naffness. There is the requisite use of the child’s voice too; with more to come. Third track Happy Feuds is equally pop-central with Keith Emerson’s Hammond organ as the pervading hint that something musically more dynamic is about to happen. Again, childlike vocals sing the essential nonsense of the lyrics, but within that nonsense about ‘knowing themselves’, it actually hooks into the adolescent questioning of personal identity, so I think it really did appeal at the time more deeply than it can – platitude alert – listening now.

It’s fourth track Intermezzo from the Karelia Suite, from Sibelius, where the ‘seriousness’ kicks in. It is a rousing tune in its own right, but the organ with pounding drums and bass of respectively Brian Davison and Ian Hague leading into the jazz organ solo announces its prog credentials with virtuoso skill and volume. It ends too on a psychedelic noise-jam leading back to the romp of its main melody which was genuinely adventurous for its time. Emerson’s L-100 huffs and puffs and swirls are stonking.

That’s side 1 on the LP, and side 2 is the prog rock suite Ars Longa Vita Brevis which translates to ‘Art is long, life is short’, a suitably grand maxim for a band of the time and inclination, and again adolescent aspirations to being creative. Its five movements contain another requisite of the time – the drum solo – and there is also a full orchestra used for some parts. Emerson indulges himself in some piano virtuosity as well in 2nd Movement – Realisation before returning to full orchestra and Hammond for the 3rd Movement – Acceptance ‘Brandenburger’ where the jazzy appropriation of J S Bach’s Brandenburg Concerto No 3 is brilliant, and quite beautiful. The classics made cool for this 15/16 year old at least.

The Latin maxim of the album’s title and the side 2 suite formed the basis for my English ‘O’ Level creative writing exam in 1969. I don’t now recall how I was able to use this and its named movements – Awakening, Realisation, Acceptance, Denial – but I did, relishing the conscious manipulation to sound knowledgeable and informed. I do vaguely remember really enjoying what I wrote and how I incorporated the gist of the aphorism in some youthful declaration of creative intent. Pretentious? Hell yes. And of course I did well, but as an eventual English teacher I never lost sight of the fortuity of the examination process this had presented me and thus its many flaws, though in this case I was able to make positive use of the opportunity.

So for many reasons this album is important both musically and as significant memory and deserves its place in my Top Fifty. 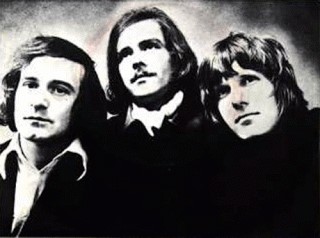 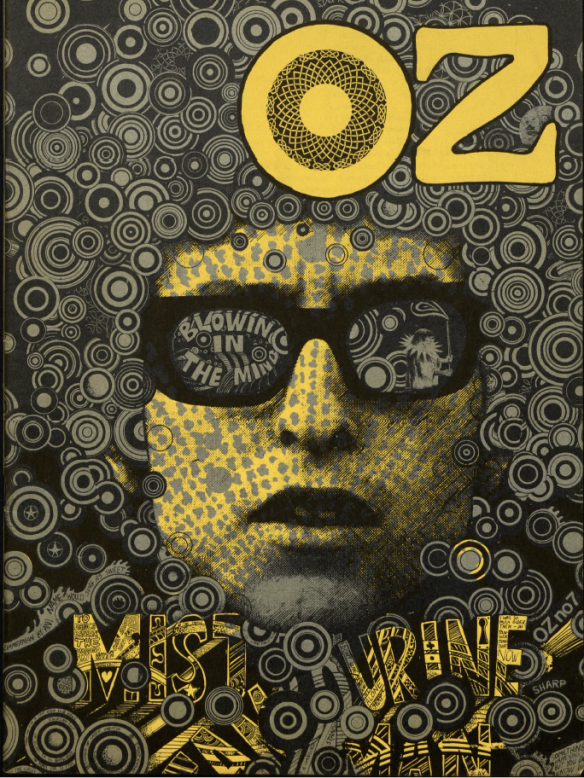 It’s a long time ago thus I can’t remember precisely, but school had already started, so it will have been late September but quite likely October of 1967 that I first came to England, living in Ipswich and going to Chantry Secondary Modern School for the cultural shock of my life.

It was either ’68 or ’69 when I had the poster above hanging on my bedroom wall with many others, my Dylan the full red/orange colour, as I recall, and a shiny gloss surface. 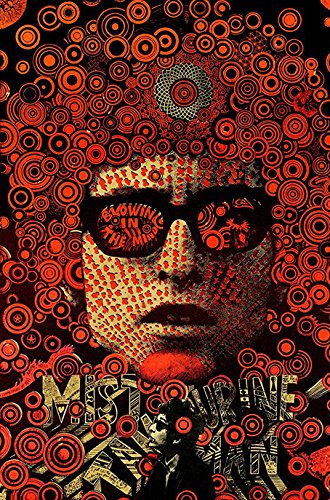 I mention because you can – as I currently am – download the entire Oz Magazine collection here.

I am as much as anything
that something which gave me

so many connected
with what could fire

a sunlight characteristic
if quieter this time:

the shortening days
and some savage asides,

but today brings
yet more books

and just as the real summer
we look ahead for better.

I try to find somewhere
of honest appraisal

in the emergence of these days,
so little to utter

without a bit of warmth
yet I am glad

to have this intellectual
independence more reminiscent

of somewhere there was no doubt
and I believe in fully.

It must have been
in the genes

this dappled characteristic
as we will now call it. 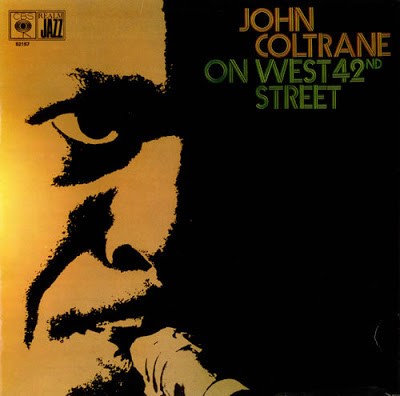 Yesterday I was listening to Pharoah Sanders’ John Coltrane tribute album Crescent With Love and it got me thinking about the first time I heard Coltrane. It was on an LP I got when I was about 15/16 years old, John Coltrane On West 42nd Street, and it was well played at the time so is a little rough if put on the turntable today. I’ve never been able to find a cd copy, and in that ever turning learning curve I now know this is because it isn’t strictly speaking a John Coltrane album – it is a vinyl only collection put out under his name to cash in on his then emerging popularity.

Taken from 1957 recordings with the Wilbur Harden [fluegelhorn] quintet, including on the tracks on the album Tommy Flanagan [piano], Doug Watkins [bass] and Lois Hayes [drums], the record includes the following songs in this order: Side One – Wells Fargo, West 42nd Street, E.F.P.H. [sic]; Side Two – Snuffy, Rhodomagnetics. I am writing this as these and other tracks [19 in all] can be found on cd on the Coltrane Mainstream 1958 Sessions where, for any nerd interest, there is an extra ‘F’ on its third track E.F.F.P.H. [compared with album liner notes, though on the album itself there are both ‘Fs’], and the Side Two tracks on the vinyl are inverted as well as becoming respectively in that inversion tracks four and nine [and you’d have to be intense to want to follow that]. 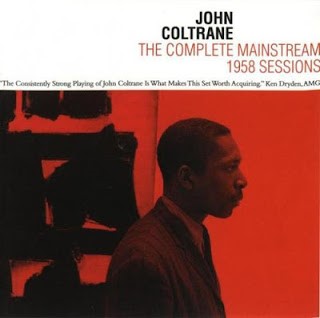 All five tracks are quite conventional and there isn’t an outstanding melody/song, compared with, for example and unfairly, My Favorite Things. Each player gets a solo set and this too is quite formulaic. But I do recall simply loving each Coltrane solo as I still do, inevitably mixing that nostalgic sense of first discovery with the continued appreciation of today. I’m not incisive enough to really discern differences  in absolute quality of playing – though it’s hard to make a bass solo soar like Harden’s flugelhorn – but Coltrane’s tenor sax solos do always seem that little bit more adventurous than the others; more on the edge of breaking from the formula and routine. Yet that could be the wishful thinking/hearing of my original joy and the occasional nostalgic revisiting – though listening as I write to final track Snuffy, Coltrane’s solo following Hayes’ piano really does dart out of the starting gate and run much more wildly and entertainingly.

It makes my Top Fifty for all the obvious and right reasons as I hope I have outlined here. As well as my first introduction to Coltrane, it consolidated an incipient interest in jazz, and a fairly traditional form of jazz as well. Whilst I moved on to the more adventurous and avant-garde, I think I had my fix of that already from the prog rock representation of the time. 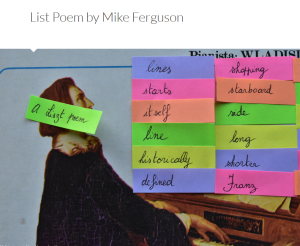 So delighted to have my List Poem up now at Burning House Press here.

Big thanks to current guest editor Florence for such warm enthusiasm about this and care for presentation, with creative work by Alexandre Cesa [I have kept the image small here so you check out the site – please – to see the larger version].

In addition to that genuine appreciation, I am also pleased because I have always championed list poems: to read from others, to write over the years, and to use in my teaching of creative writing – especially for regular National Poetry Day ideas/resources. I’ve had the pleasure over those years to read so many wonderful list poems from students.

This one is my dedication to its art. 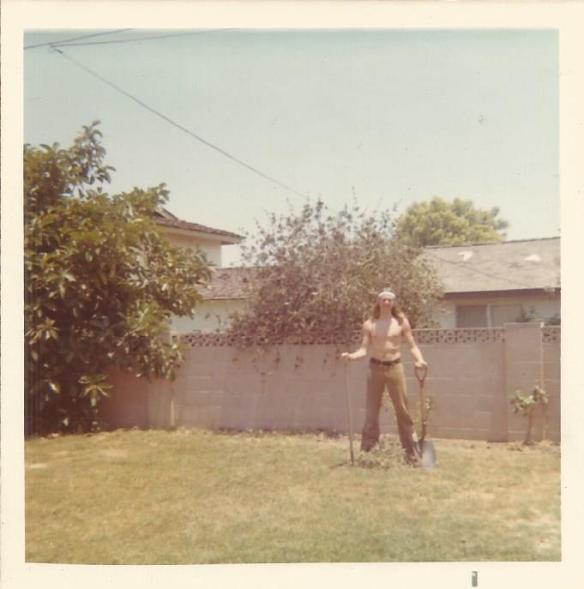 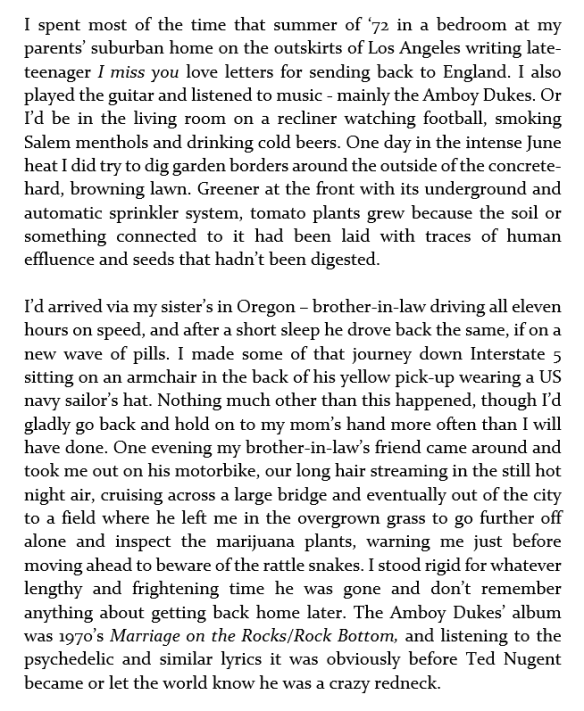 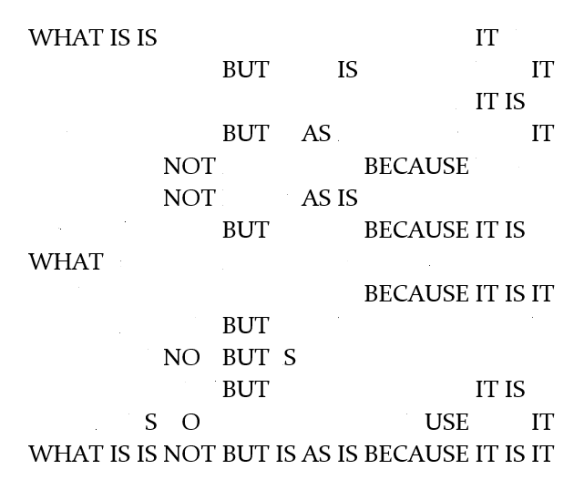 Read as a dialogue as is

Very pleased to have my poem Recycling at The Poetry Village here today. With thanks to David.

It should be easy enough to find a love poem to post on Valentine’s Day, and of course it is, but I recalled I had an anthology of love poems from years ago – remembering its green cover, and thinking I enjoyed reading it back then – and so it seemed interesting to seek out and find a poem from that nostalgic source. 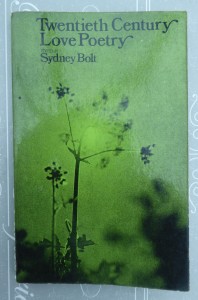 And I did find it, but what a miserable collection! I’d forgotten how narrow its selection was too: its three main poets T.S. Elliot, D.H. Lawrence and Robert Graves, and then fifteen individual poets ‘Since 1945’. Well, we all know how miserable Lawrence can be, and is, and the fifteen are little better in avoiding the ‘darkness’ and ‘pain’ of love! I note I had got the book in 1973, so aged 19, and perhaps that teenage angst about the misery of love – albeit late – had been the attraction.

It’s not that I felt I needed to post a red roses romantic version of love on Valentine’s Day,  but I did think something reasonably upbeat would be sensible. So I got expansive and turned to poet John Hegley, searching for the light and fluffy, and thought his collection Love Cuts would be a probable good resource. ‘Cuts’? You guessed it – back to the metaphors of pain, apart from an opening poem about his first love being a ‘puppet dog’.

But I persevered, and here is another Hegley poem, just so I have fulfilled some part of my ambition for today’s posting: