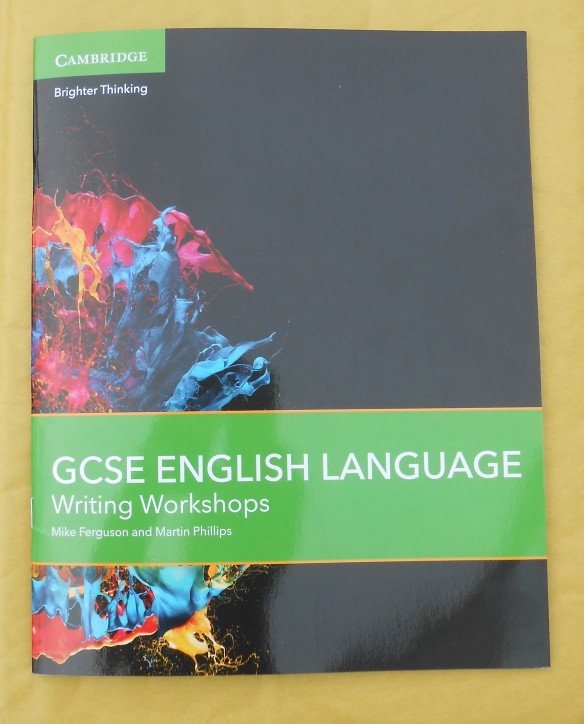 Just published, this is a stand-alone book or it can be purchased/used within the expansive GCSE English ‘package’ being offered by CUP for the AQA syllabus to be taught from September 2015.

This book, however, written by myself and Martin Phillips, is not tied to any particular examination board and focuses exclusively on Writing, treating students as writers and underpinned by the ethos that a priority regard for writing skills and experience above assessment objectives is the best preparation for the inevitable requirement that students will have two writing tasks in their final GCSE examination – whichever awarding body sets this.

The workshops aren’t intended to appear particularly innovative in such a text book – apart from excluding the clutter of constant references to AOs and similar – but instead offer straightfoward, tried and tested classroom activities that engage and encourage students as much as is possible in the writing process. That said, we think the stimulus and ideas provided also offer new and appealing material at this level.

Whether bought as a stand-alone or part of the larger ‘package’, there is considerable online digital and other supporting materials specifically for this text, as well as a dedicated, and detailed, teacher’s resource which I have written and will be available free online from, hopefully, April. 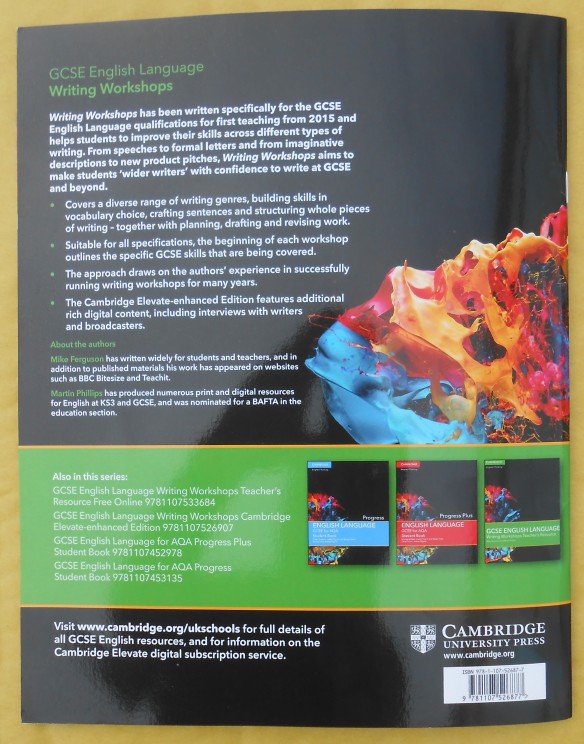 Those ‘specific GCSE skills’ are actually writing skills, but of course the latter informs the former: our ethos. Each workshop begins with – and the language is chosen purposefully – a ‘writing improvement focus’.

A school doesn’t meet its targets [that’s OBTUSE NUMERICAL BENCHMARKS] so is put in special measures which is deemed a failure, and staff, mostly teachers, get blamed and undermined and upset and depressed and maybe leave the job or get sacked in forward-thinking Academies [that’s JUST HOW IT IS].

Apparently you have to pay bonuses to bankers to keep them in the job, however poorly they do.

Apparently you can crap all over teachers and they will come back for more [if they  survive] because they care.

This is the neighing from the horse’s mouth. My local MP had represented my ‘banning American authors query’ in the first instance – thus this response from Gove to him – but I should point out that when I naturally challenged such explanations from this letter again through my MP, he personally responded with more of the above to state he wouldn’t further my questioning because he agreed with Gove, but did so by simply, and blatantly, cut-and-pasting from the DfE/Gove’s justifications – so I stopped that route, and then Gove was gone.

I have made the point about this deceit well enough I think in previous postings, but I thought it useful, for those still interested, to read this if you haven’t already challenged and received similar in the past.

I’ve considered this a ‘clever’ response and argument, and in the negative use of this word I think it is apt enough. There is much that obfuscates in this letter by suggesting there is a grand design across Key Stages 3 and 4 to instill a ‘solid grounding in English Literature’ and for pupils to read ‘widely and freely’. This is completely undermined by his risible notion of the GCSE Orders representing a ‘minimum’ requirement, and not the ‘maximum that we consider them [students] to be capable of studying’. This is so utterly naive [being generous] and deceitful [being candid] in suggesting (a) exam boards/awarding bodies could countenance setting other texts to that minimum, with all the implications for mark schemes and actual awarding grades to accommodate a potentially infinite move beyond that core, and (b) perhaps the most depressingly pragmatic obstacle that there just wouldn’t be time in a full whole-school curriculum for anyone to pack in yet more.

But of course, English students will instead be absorbing a ‘seminal world literature’, and thus those effectively banned American authors within this mix, in their Key Stage 3 curriculum where there would be loads of time for such.

The Crucible as a year 7 starter text perhaps: exploring lust, sin and death as metaphors for the abuse of political power?

I have been searching for a piece I wrote some time ago about my  own secondary school education to post here. I recall writing this about my secondary modern – just a damn good ordinary institution on a council estate in Suffolk – a model from the late 60s to contrast with the target setting and management driven culture model of schools today [or even back then when I wrote it – that culture has been here for some time now!].  However, I can’t find it.

In searching today, but also when I habitually return to such past writing, I come across articles, documents and HOD minutes I have written over the years whilst still in the job. For some reason, I have this masochistic urge to revisit these – they aren’t all dark, but so much of what I had to write was reactive, and usually reacting despairingly, and almost always angrily, to some nonsense from within or outside the school.

I came across the following which was the ending to a memo I was writing to my wonderful team about an impending review from someone in our local authority, someone with whom I had little respect or regard and who lived up to those feelings. As was my wont, I framed the memo by, at the beginning, referring to my recent reading of some excellent Raymond Chandler-esque narratives my year 12 students had written for publishing within the school, and commenting on how their writing expertise was a clear reflection of the superb teaching from the entire English team as those students had worked through the school to year 12. I ended with this:

I thought long and hard about the impending review. I’d worked with shysters before and this had all the hallmarks of some sham run by a gang of people in high places with low morals. It could rain all day on this parade but nothing could wash the stench of an unnecessary intrusion away. You can’t play chess with a dog that just wants to gnaw at a bone, I thought. You could kick its teeth out and even chain it somewhere dark and dirty but dogs were a dime a dozen in these kinds of streets. There were always more to hound you. I’ve been doing this job for years and I’ve managed to surround myself with a few good people who know the difference between a naked dame and a girl without any clothes. I didn’t want no one telling me which one I could sleep with. Neither did they. I took another drink and wondered how many more I’d need before a new day promised me something it would take too long to deliver.

A friend constructed this Gove Horror Show nearly a year ago, the day after my 60th birthday and as we posed on my back lawn. I’m the Gove in Sunglasses construct: clever, but deeply disturbing.

Gove is gone, but I believe it is acceptable at the very least to toe-poke such a man when he is down…..

Amongst the many deceits from Gove regarding his shaping of the new GCSE English syllabi to be taught from 2015 was the assertion that he had consulted over 151 professionals to inform this [see the document INDIVIDUALS CONSULTED IN THE PROCESS OF DRAWING UP THE DRAFT PROGRAMMES OF STUDY FOR THE NEW NATIONAL CURRICULUM, if you want to check].

I have it on good authority from someone who makes it a living to investigate this kind of politician’s assertion, that the claim is a significant porky pie. On the list referenced above there are indeed about 151 names, but to be precise from the start, these were for all subjects out for this consultation, and of these, 45+ are attributed to having been consulted on the English Language/Literature proposals at that time. Impressive statistics overall – if they were honestly calculated from the start, or any of them true.

I had been informed that the bulk of the names on that list actually applied to individuals who had merely attended nationally organised conferences on the proposals in general. So their names appeared on an attendance list. They went along. Had some coffee. Listened. Perhaps had lunch [I don’t know the timetables for the day]. Went home.

I decided to check this out to the best of my ability and made contact with one of those named people on the English list, a highly regarded teacher of and writer on English, and he confirmed that he had indeed attended one such conference. Consulted? Not a chance. He went along. Had coffee. Perhaps had lunch. And so on. I believe that the singular biggest ‘consultant’ and influence on the supporting of Gove’s ideas was Janet Brennan, former HMI with key experience in Primary education [and then an independent consultant for these Secondary education proposals].

Admitted, that’s just one actual verified statistic against the 151, give or take a few, unverified by Gove. Whilst bound to trust my own, I leave it to your judgement where you think the most likely truth lies [oh, the cleverclogs of it all].

As to Lies, damned lies, and statistics: no doubt Gove would like to attribute this famous quote – if he had to – to his British Tory chum Disraeli [though that has apparently never been possible to find and thus prove] rather than that pesky American author Mark Twain who popularised it.