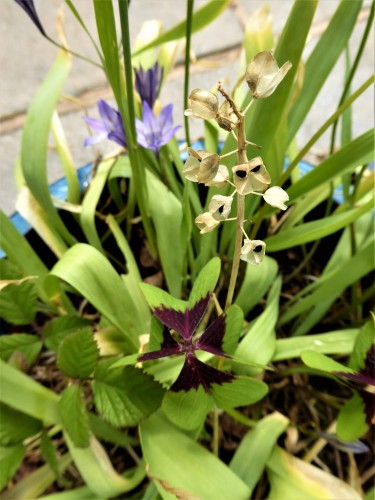 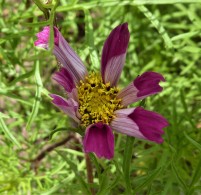 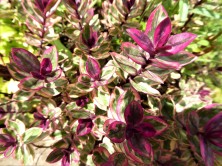 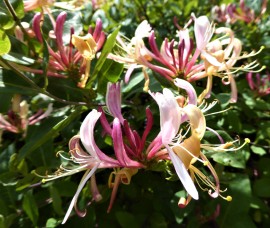 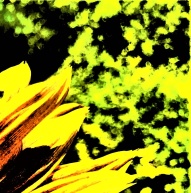 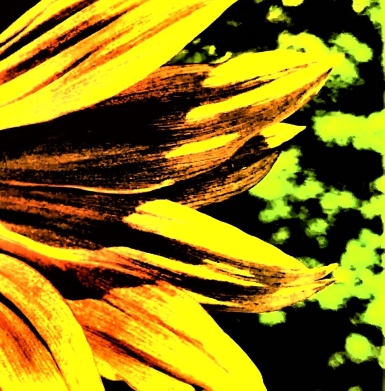 When it comes to the provision of online/remote learning resources, especially in my subject English, I know I am hard to please. And so I should be. So should everyone, who cares. It has to be more and better than simply providing tasks that have loads of things to do and bright colourful pictures and so on.

I have already been critical of the English work provided by Oak National Academy, an organisation soon to benefit from around £5M of government [our!] money to continue its online provision. Difficult to access resources in their entirety [to get past a test, for example], my observations so far are on what I have been able to see – this corroborated by other like-minded English teachers. But I won’t revisit that now.

This next is an online provision I came across today, advertised on and therefore promoted by the GOV.UK. site. This resource for ‘creative writing’ is an image with writing prompts, these [well, again I’ll admit, I’ve only seen this one] providing poor examples of writing style as well as promoting the interminable ‘remember to use a few semi-colons in your writing’ meaninglessness that has been spawned by the devil of Key Stages 1 and 2 English SATs.

Anyway – here is my take: 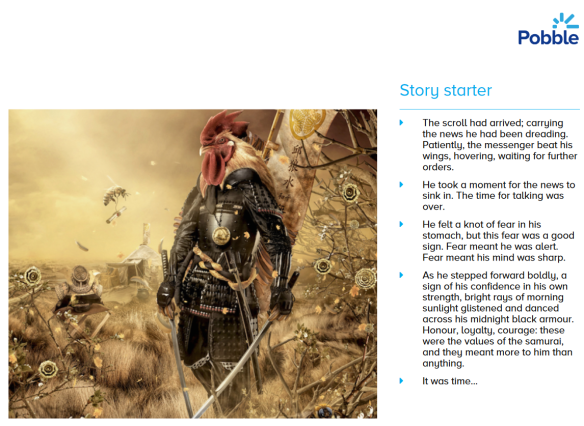 It was definitely the time. It was time to ask questions. Simple questions in simple sentences.

‘What fucking scroll?’ the chicken asked anyone who was listening. ‘And who put this fucking armour on me? I’m a fucking chicken!’ the chicken complained. ‘I could tell you why I crossed the road if you asked, but I have no idea why I have been semi-anthropomorphised.’

No one answered; no one was there: only semi-colons and colons dotted about the field like unwelcome intrusions for visual effect.

‘That isn’t a ‘knot’ in my stomach,’ the chicken complained further, ‘because apart from being such a boring clichéd expression, we all know it’s because I’m being made to wear fucking armour around my poultry stomach – that’s a chicken’s stomach which isn’t meant to be constrained by clothing, military or no.’

The chicken was working up to a major diatribe.

‘And what is this nonsense: bright rays of morning sunlight glistened and danced across his midnight black armour? Who the fuck thinks light can ‘glisten’ or ‘dance’ on black? Black absorbs light. I know a chicken dressed in armour is the really serious mismatch here, but if you are trying to encourage students to write descriptively and perhaps even evocatively they should also be encouraged to write believably. It’s not like the description is meant to be a paradox. It’s the use of a varied vocabulary for the sake of it rather than meaning or impact.’

Those were the last words of the chicken. He was struck in the head by an arrow. In his armourless head. Right smack in his metaphor.

Could I do better? I think so. I’d be happy to have my and fellow writer Martin Phillip’s Writing Workshops material posted online for free access, including the Teacher Resource [already available for free download] as well as all of the book’s video and extension materials. The work in this book is all about treating students as writers and providing carefully considered advice and suggestions. It is also diverse and, we’d like to think, engaging.

But that would be a commercial decision beyond our control. Published by Cambridge University Press, it would require a lot of work, and external funding, to re-purpose for free distribution. 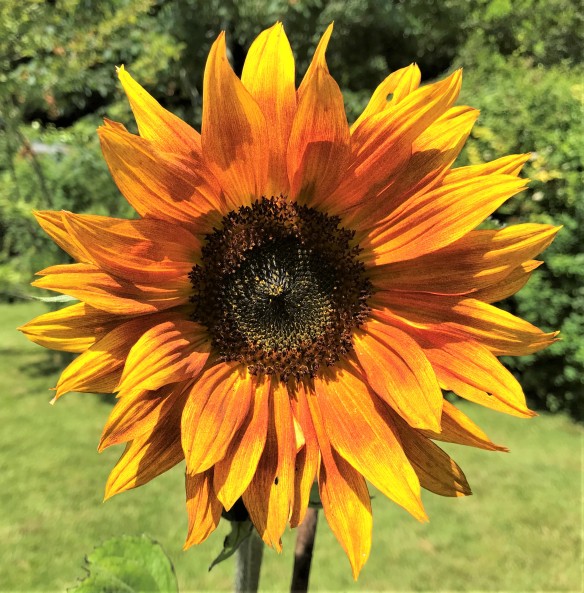 These midnight searches
for slugs, my torch to spot and swat
most away, yet leaving those on the single
exenterated runt clearly and cleanly loved
to its diminishing, this utilitarian reserve
that saves remaining and tall ones with
buds ready to open as suns.

Further details and how to purchase can be found here.

It is a neat, clean and crisp chapbook and my sincere thanks to writer/publisher John Goodman for his close attention to detail in editing suggestions. You can support his small press by buying a copy.

Enjoy if you do!

NB ‘But if there is an overriding theme to this collection, it’s the interrogation of language; subjecting it to questioning, testing, parody and – as is clear from the exuberant nature of the pieces – celebration. The poet is revelling in what language can do, how it can create its own reality by association, random connection and musical phrase.’

– Taken from a review of my other found prose poems collection The Lonesomest Sound by Alan Baker at Leafe Press, with my thanks.

It is just over ten weeks ago that I posted this collaboration with Rupert Loydell, a words/images reflection on that time and anticipating ahead across ten pieces. How have those ‘predictions’ panned out? For me, the one salient line, though not hard to suggest as the obvious, enduring feature, is The rhetoric of a political mantra is to insulate meaning from message.

The final of my three readings from Aeons of Upheaval

‘You know the feeling
with you right next to me

to put it politely
wolfing the cheeky’

And so we sit on the new sofa next to these words not knowing whether to sit up straight or go into full recline, and I say (indeed have said): go with the flow.

The opening set of seven poems is a cocktail of neat perfect irregular construction, two-line stanzas where language bursts with surprise moves in their narratives, and it may be that there is more about sitting down,

‘We can expect the cracks
hogged off down the road

their destination plural kissing
decades of bums. There’s this duality’

but I think the inner maze of the pathways keep us far more active and moving along.

In Domestic this journeying is led with similarly sudden sidesteps but also time-shifts in language, like the line

‘Find the wanton thee by the roadside’

Here is a marriage (within another story) that is romantic/sentimental

‘Come to us via a tear duct’

as much as it is other,

‘Yet down the whitening heal of your cut’

In Ground Rules there is a storytelling that conveys its shifts and mysteries in a fluidity that belies the uncertainty. Here we are in a different pathway, one where we too

by the nerve doctor who emerges naked from behind
his door. You find you have learnt a lot of his books
by heart unintentionally, especially the beginnings
of paragraphs. He shows you real things, drills you
and gives you an overcoat with a different plot to it.’

All storytelling is told and heard and imagined in the mix.

The story of Lukewarm after a Wet Dream is less salacious than it is soothing, with beautifully measured and flowing lines. I am not entirely sure, but I have gone with the flow.

I think reminiscence, reflection and the ability, or not, to remember are a continuing feature in the poems. The shiftings of some, as already noted, reflect this in a way. In a wonderful poem Milestone, from the second section, there does seem to be a looking back at an important event/moment (or many) and how this has defined as much as it mystifies. The past is, of course, simply gone, but it was, and perhaps rather than disappeared it is otherwise ‘hidden’ and ‘sometimes fuzzy’. This isn’t being philosophical about it, and a ‘shot of whiskey’ might reveal when the fear of not knowing is gone.

I am used to the expectant delight of Ian Seed’s signature prose poems and their distinctive storytelling, and now the poems in this collection present a broad range of styles (putting it a little simplistically) to enjoy. There is another window, not unexpected, yet opening further the poetic view. The poem Once True is another liquid search through memory, here whatever was between light and dark, a search now like then, and the poem’s narrowed-on-the-page, calm move through is lyrical and sombre and accepting of the urge/need to continue,

‘…There
was always a lovelier one
you could not reach.’

The third section contains more poems about reflection, interpretation and assessment. Across thirteen parts of four three-lined stanzas of the poem Absences there is a regular and controlled framing of knowing and questioning. There is a palpable sense of regret, of also not knowing and some sadness. There is also a palpable beauty in the slow, steady recall of this, and some sense of how to accommodate it poetically and emotionally,

‘In this incompleteness, I make up
my own story, begin over
and over again without ever

entering the plot, hanging on
to the privilege of not knowing.’

Whereas the earlier poems have the jagged syntax of disruptions in the discoveries, here there is an overall sense of such inevitability,

‘…I have
a friend who says that all journeys

by definition are broken.’

What is real and what isn’t real? What is, is the mood of lament through these which I found genuinely moving. I knocked and this is what I heard.

The collection concludes on the book’s title poem, and the double spaced individual lines of the nine parts of the poem are another stylistic feature of expressing movement and the mantra-flow of the self incantating on want and need and what is. Here again are the shifts in juxtaposing sudden tangents, meaning found in the truths of the flow with which you must go,

‘the motion of wandering the mirror first word

their operation wayward a last note as if lying for’

This is a superb collection – eclectic in its playfulness as well as the plaintive arc across recollections so perfectly poised on their mirroring gracefulness – and if you go to the Knives Forks and Spoons website here you can buy as well as read the three blurbs that convey such an empathetic feel for the poems.